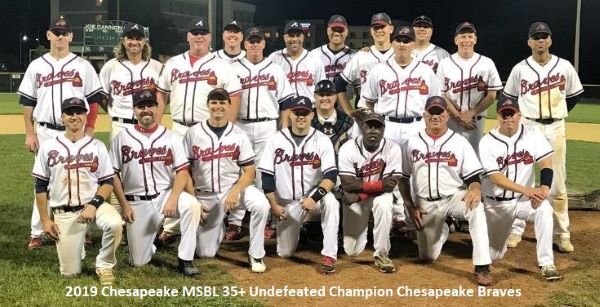 (Editor’s note: I began covering this story five years ago when first informed of an undefeated team in the Chesapeake MSBL, which is always special. The story continued and grew legs every year and has gained momentum of a surreal proportion. Every year I promise Jeff (manager Wolf) that I will not talk about it because I may jinx the streak. Well, the gorilla in the room must be fed! The Braves did it again in 2019 and now stand at a truly unbelievable 130-0-1 record, which is a story of national proportions that eclipses our MSBL platform. It is only fitting that I asked Jeff to put this season into his own words, as only the manager could. Enjoy this amazing journey!

Our Chesapeake Braves completed our fifth straight undefeated season in the 35+ age division of the Chesapeake MSBL. We ended this season with an overall record of 26-0, which included four playoff wins in the 8-team double-elimination tournament. Our five-year overall record now stands at 130-0-1. 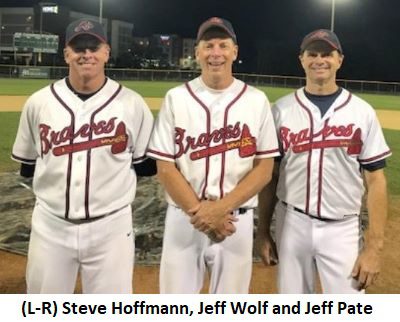 There are many that think we play an easy schedule or load our team up with superstars but this is simply not the case. The league is highly competitive and we have many close games every year. Our pitching and defense are very good, which helps in the games when the bats are silent. We were led again this year on the hill by Dave “Grease” Greeley, Josh Molnar, Steve Hoffmann and the return of Danny Miller. The Braves have stayed mainly intact for the last 14 years with a few additions. Grease’s no-hitter on May 21st was one of the highlights of the season.

There were many close calls this year. We ‘eked’ out a 7-6 win over the Mariners on the last day of the regular season by throwing the tying runner out at the plate in the bottom of the last inning with nobody out and held on for the victory. In the semifinals of the playoffs we won a tense, rain suspended game, against a very good Hooks team by scoring two late runs to secure a 9-6 win. The championship against the Tigers was highly competitive into the seventh inning where some late Braves heroics secured the Championship!

We had a very injury filled year as 12 players missed games due to injury. Without a deep roster of players this could have derailed our season but “next man up” mentality has always been the way the Braves think. Our players willingness to sacrifice for the good of the team is the only reason we are able to be successful consistently. We know the streak will end sometime but we continue to go out and have fun every game and play hard. We continue to enjoy everything about the great game of baseball from off season preparation, to pregame warm-ups, to post game camaraderie! There is no greater game!

We have good relationships with the other teams and players in our league and many play together in post season tournaments and all-star games, which helps tighten the bond. There are those from outside the league that think this streak is a joke, not good for the league, or a team of all-stars, but most from our league would disagree. The gap is certainly not large between the teams in our league that are filled with very good players. Teams continue to get better and next year will be more difficult than ever but we will continue to play one game at a time and have FUN!