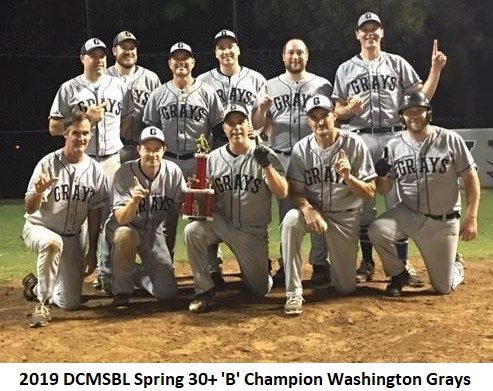 ‘Grays Finish Season on Hot Streak with Sweep of Cardinals’’

When I looked at this lineup on opening day my optimism was the highest it had been in the 11 years since starting the team. In the off-season I added much needed youth and depth at middle infield, pitching and outfield. Yet sometimes the best laid plans…well, you know the saying. We lost five out of our first six games of the year and was wondering if my scouting abilities had gone awry.

Through a combination of injuries, errors and a scheduling conflicts, the Grays never really put their top lineup on the field. We entered the post season tournament as the three seed in Bracket B. Then everything started to gel.

Our first task was facing the #1 seeded Athletics, who beat the Grays two weeks earlier by a healthy margin. This time things were much different. The Grays came out swinging and quickly pulled out to an 8-0 lead. Every bounce went their way in this one as the Grays played their most well-rounded game of the season, playfully flawlessly on defense and racking up 18 hits in a 16-0, five-inning win. I was able to throw a shutout while giving up just two hits. Jason Cushman and Tom Haslbeck each homered in the convincing win.

From there the Grays moved onto a three-game championship series versus the Falls Church Cardinals. The Grays split the series during the regular season and we knew this wasn’t going to be an easy task.

Game one was back and forth early as the Grays faced the Cardinals ace on the hill. With patience at the plate the Grays pulled out to a 5-2 lead, led by starting pitcher Dan Murphy. Murphy battled for seven strong innings allowing just two runs with five strikeouts. Alex Krupenchenkov came in to close out the game, thwarting a late rally by the Cardinals. Final score 7-6.