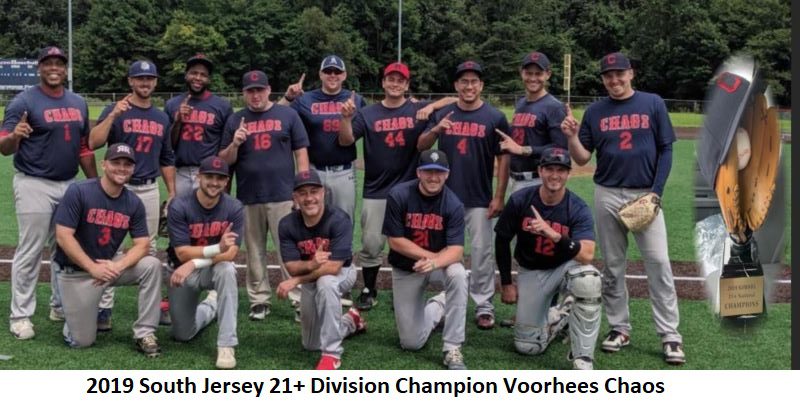 The Chaos was created because I tried to become a free agent the prior year after not playing baseball for 24 years. That didn’t happen so I created my own team with another friend of mine. Mitch Brown and I split the 2019 managerial duties. At first we were struggling to acquire players, as people thought it was a joke. Then little by little we started picking up one good player after the next.

My team is a little older for the 21+ division and we had to deal with many injuries throughout the season. But with a few key additions before the deadline, aka pitchers, our team really started to mesh in the second half of the year. We finished the season in second place with a tough task ahead of us as the first-place team only had two losses.

In the Championship series we were missing our best pitcher on day one of the double header, so we knew taking game one against the Dynasty was vital. It turns out we won the first game 10-5 and we were happy to do so. The second game we ran out of pitching, which turned into a joke basically as they took a nine-run lead. Late in the game, though, they also ran out of pitching. We were down eight runs in the last inning and started to mount a comeback. We scored seven runs with the bases loaded and two out. I thought it was about to be a win and then we popped out to end the gamed, losing 16-15.

Finally, the last game was a pitcher’s duel for a while until we hit a bases clearing double to give us a 4-1 lead. We then scored a few more runs in the seventh and eighth and ran away with the championship 9-1. We defeated the SJ Dynasty in the championship series two games to one.