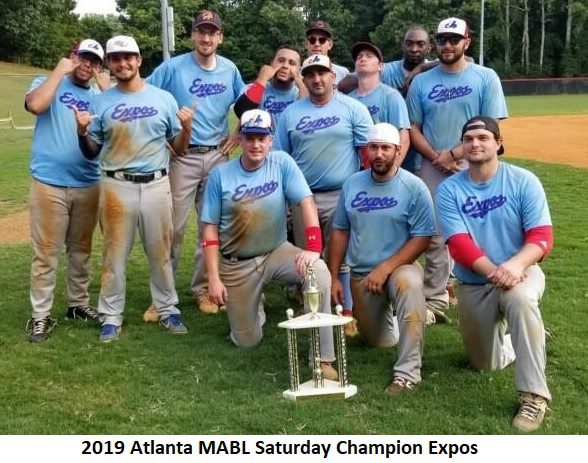 ‘Concevitch and Bartlett Seal the Deal on the Bump’

The Expos put an exciting end to their Cinderella story by winning the Spring Saturday League championship in the Atlanta MABL. Only two years removed from being the worst team in the league, the Expos swept the former 5-time Champion Clowns in the best of three series. The Expos, who took the hardest road to the championship as a wildcard team, defeated the reigning league champions Reds in a tough fought 4-2 victory in the semifinals.

The Expos came into the championship series as heavy underdogs and without one of their ace starters and cleanup hitters JD Shields, who was out due to injury. Game one was a close game until the Expos broke out to a 6-0 lead in the fifth inning and then added another seven runs in the top of the seventh to take a commanding 14-0 lead. The win was a combination of patience at the plate, heads up base running, and a spectacular pitching performance by Ian Concevitch, where he pitched a complete game shutout, striking out 10 and scattering only four hits.

In the second game of the double header, designated hitter Spencer Iacovone, led off the scoring in the bottom of the second with a 2-run homer to left centerfield giving the Expos an early 2-0 lead. A ravaged Clowns pitching staff was shorthanded after using four arms in game one, including their scheduled game two starter. The Expos took game two and the series sweep with a 13-0 victory. We were again led by a spectacular pitching performance by long time work horse David Bartlett, who also threw a complete game shutout while racking up six K’s and giving up only three hits.

Games one and two starters, Ian Concevitch and David Bartlett, were named co-MVPs. Combined they threw two complete game shutouts while racking up 16 K’s while only surrendering seven hits.