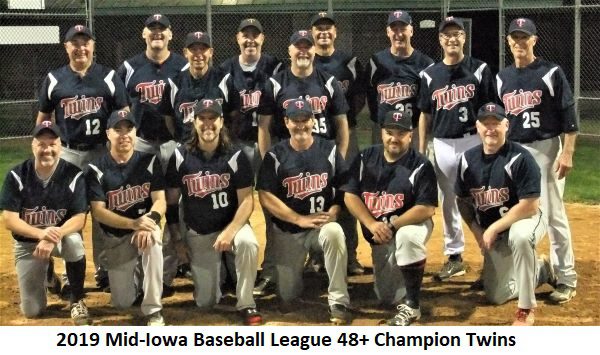 The 2019 Mid-Iowa Baseball League 48+ division Twins had an outstanding season resulting in the team’s first regular season league title in many years. Previously playing in the league’s 45+ division, the Twins stepped into the newly created 48+ division and made a little noise securing the regular season title with two games to go.

Getting off to a slow start on the season with an interleague matchup against a very capable 42+ division opponent, the Twins suffered a 15-2 loss as they spent a great deal of energy chasing balls all over the field. Fortunately for this group of seasoned Mid-Iowa Baseball League veterans (and one rookie), they bounced back during the next week of league play and over the next 10 games compiled a record of 8-1-1 which put them in a place where they couldn’t be caught.

There is not enough room in this story space to cover all of the individual contributions to this team’s success and it would be a great injustice to leave anyone out as it was most definitely a team effort requiring determination on everyone’s part. It is without a doubt the best this team has played together over the past few years with some very timely hitting, a few long balls, and great starting/relief pitching.

The team photo was taken immediately after the game in which the Twins cemented the league title, those huge smiles on their ugly mugs came easy. A little solo cup champagne celebration followed this conquest and the smiles haven’t left their faces since.

It is a pleasure to participate in the Mid-Iowa Baseball League. The competition and the comradery are irreplaceable elements of our lives here in the Midwest. It brings great joy to us to play in this league with some other equally great teams and ballplayers. The Twins are managed by Jerry Floyd and assistant manager Mark Coady.

Here’s looking to parlay this regular season success into the end of season tournament for the Twins. Already looking forward to next year!