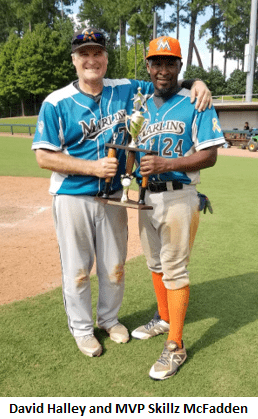 The #1 seed 40+ Sanford Marlins knocked off the #2 seed 40+ Premier Orioles in two straight games at US Baseball Complex to win the 40+ Central North Carolina MSBL Championship for the second year in a row.

In the first game of the Championship Series, Doug Barefoot pitched six strong innings giving up only four runs on eight hits to earn the win for the Marlins. Randy Calcutt relieved Doug in the seventh and held the Orioles to just two more runs and four hits for the rest of the game. The Marlins won the very close game 6-7, behind strong offensive efforts from Skillz McFadden (2 for 4), Dave Royek (2 for 3) and Don Montgomery (2 for 4).

The Premier Orioles, managed by Charles Orndorf, were led offensively by Vinny Stio (2 for 4), Clint Little (2 for 3), Jeff Shaeffer (2 for 4), Rob Isbell (2 for 3) and David Blaha (2 for 2). Charlie Wildes took the loss for the Orioles, but pitched a strong game. The Orioles lead 5-4 in the seventh, but the Marlins scored three in the seventh and held on to the lead the rest of the game.

In the second game of the Champion Series, David Halley pitched seven strong innings giving up four runs on eleven hits and getting out of several men in scoring position jams. The Orioles led until the fifth inning when the Marlins scored two runs to take 3-2 lead. Dan Thomson came in the eighth inning with bases loaded and no outs to get out of the inning with just two runs. The Marlins added two more runs in the eighth and ninth inning to win and win the Championship 7 – 4.

Strong offensive performance by the Marlin’s Skillz McFadden (3 for 4) and big 2 RBI double by Dan Thomson. The Orioles were led by Vinny Stio (2 for 5), Shannon Martin (3 for 4) and Jeff Moore (2 for 4). Orioles Clint Little took the loss in very close game.

Alan Nowak, in their semi-final game 12-4. The Raleigh Red Sox, beat the Blue Sox, managed Marty Woodward, by a score of 8-5 in the play in game.

Skillz McFadden was named the Championship M.V.P. In two championship games he was 5 for 8, with 3 runs, 3 RBIs, four stolen bases, a double and a triple.