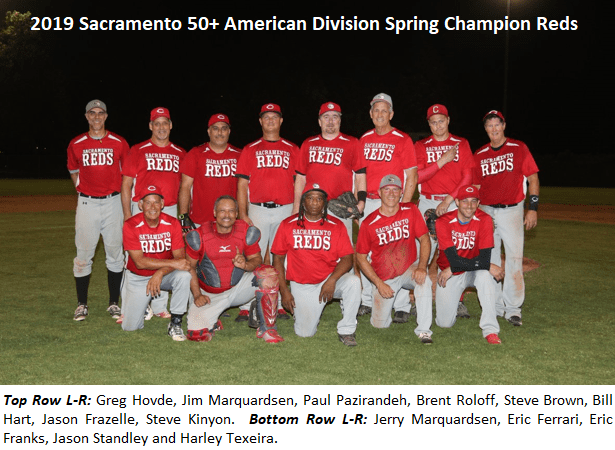 ‘Reds Topple #1 Seed Riverdogs on Way to Championship Over Orioles’

In an interview with Steve Brown, the Red’s Manager/Player, Brown stated that “It was a great team win. Jim Marquardsen started on the hill in the Championship Game and pitched great and ended up pitching a complete game. Our offense scored two runs in the first inning to give Jim a little bit of a cushion and he was able to relax and throw his game. We also played great defense to keep them from scoring.

I am so proud of all the guys and it took the whole team to get us there, let alone to win. It is tough for me to single out only a few guys because EVERYBODY contributed, but I guess I have to in order to help paint the story. But let me be clear, everybody in the team picture were and are key guys to this team and this Championship. Truth be told, our Reds struggled during the regular season with some tough losses by a run or two in the late innings on several key games. In addition, like other teams I’m sure, we had several key injuries and could not seem to get in a rhythm due to games being postponed and even cancelled due to the weather at the end of the season.

We were lucky to even make the playoffs as the number four seed. “As the four seed we had to play the first place Riverdogs, who are a tough team and had 10-runned us the last time we played them. I think we surprised them for sure. We struggled a bit at first, and had to make a pitching change in the second inning and went with our last available pitcher, Steve Kinyon, to close it out.”

Due to arm injuries and other factors with several of our other pitchers, we had no real plan if Steve got into trouble. Steve pitched great and thankfully was able to go the rest of the distance and put us in position to win. It was a great game that went back and forth and all came down to a play at home plate to end the game. We got the final out with a huge relay throw from Jason Standley in left field from a gap line drive double to deep left center field. Jason tracked it down and relayed it to Brent Roloff at short who then threw a bullet to our catcher Eric Ferrari who put the tag on for the third and final out.

This play was huge because it prevented them from tying up the game or worse – losing it all with a walk off single. We ended up scraping by with a 11-10 win against the Riverdogs, putting us in the Championship Game against the Orioles. For both playoff games we really came together as a team. It all happened with the right mix of great pitching, good at-bats, solid hitting and scoring, and huge defensive plays in both games. “I could not be prouder of these guys individually and as a team”, said Brown.