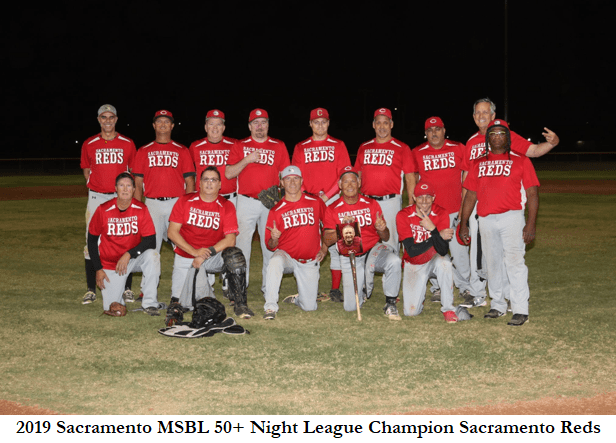 October 8, 2019 – It was another great team win and going back-to-back to win championships this year in both the Night League and the Winter/Spring League was truly special. This is my 25th year playing in the SMSBL and 30 years playing in Sacramento. I have been on numerous championship teams over the years, but going with back-to-back championship wins is very rare. At this age, it is just great to still being able to play this young man’s game, let alone to win. This year’s two (back-to-back) wins means a lot to me.

As for the Night League Championship, we needed to beat the A’s in a best of three game format. The A’s are a tough team and have always given us trouble in the past. In short, we won the first game, lost the second game, and had all of the marbles on the line for Game three. One of our starting pitchers, Steve Kinyon, pitched great and ended up pitching complete games in both Game one and in Game three, with two different catchers (Eric Ferrari and Mike Perkovich), as Eric was not able to make Game three.

In Game three, the A’s got off to a quick start by scoring two runs in the first. Our offense scored two runs in the second inning to tie it up and help Steve relax a bit so he could throw his game. We scored again in the third inning by a key hit by Jeff Bare, giving us a one run lead over the A’s. But the A’s battled back and scored two more runs to take the lead back from us.

I told you they are a tough team. But then in the fifth inning we got a couple of key walks from Greg Hovde and Eric Franks to get the bases juiced for key hits from Jason Frazelle and Jerry Marquardsen to help us score two more runs, putting us ahead with the score at 6-to-4. The game score remained the same for the rest of the game and it all came down to the final inning with the A’s having two guys on with two outs and their number three and four hitters due up. Thankfully, Steve and our Game three catcher, Mike Perkovich, were able shut it down by striking out the A’s number three batter who had a hot bat all game and throughout the 3-game series.

I am so proud of all the guys and it took the whole team to get us there, let alone to win. It all happened with the right mix of great pitching, good at-bats, solid hitting and scoring, huge defensive plays, and perhaps just as important – good team chemistry. All season and year long, we kept picking each other up, stayed positive, and never gave up. I could not be prouder of these guys individually and as a team.