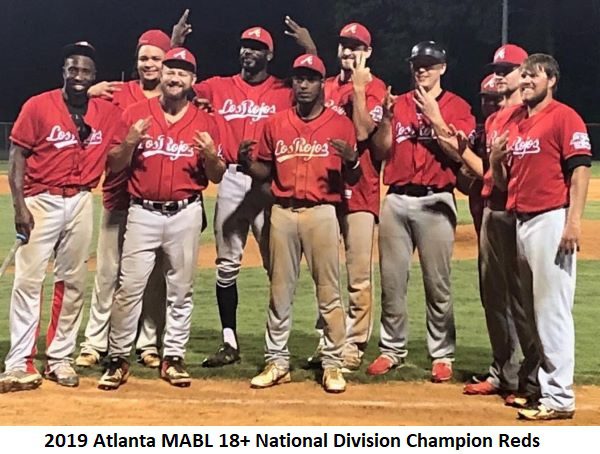 ‘Reds Post ‘Three-peat’ in their 25th Year in League’

The Atlanta Reds celebrated 25 years in the Atlanta MSBL/MABL by capturing their third straight National Division Championship by defeating the scrappy Sidewinders 9-0 and 10-5.

Tyler Massey took home the team MVP and the teams Triple Crown (.389 BA 9 HRs and 37 RBI`s). Jamie Sexton posted an 11-2 record with 102 strikeouts and a 1.88 ERA. Rocco Callaway also contributed five home runs and 22 RBI. Pitcher Colton Prather, the third overall pick in 2019 draft, won all three games he started, along with achieving 5 for 5 in save opportunities with a 1.53 ERA.

I would like to give a shout out to the National division managers for putting together competitive and classy team’s year in and year out. The Atlanta 18+ National League wouldn`t be as competitive as it is today if it wasn’t for solid team leadership. The managers know the game, they respect the game and they have the respect of their players.