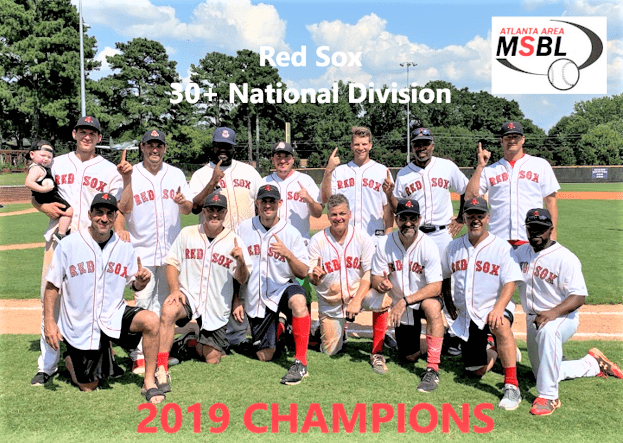 The 2019 Red Sox spent the entire spring and summer in first place, but we were pushed to the limit in the best-of-three championship series by the Atlanta Grays.

In the playoffs, we had a two-game sweep over the Atlanta Bulls in the semifinal series to get us to the finals for our showdown with the Grays.

In the first game, the Grays got out to an early lead scoring four runs in the top of the first, but we scored two in the bottom half, then two more in the fifth to tie it up. The Grays pulled ahead for good in the sixth with three more runs and went on win game one 10-5.

In the second game we got out to an early lead, scoring six runs in the top of the first and another three runs in the second to just jump out to a 9-2 lead. Chris Evers pitched a solid 5 2/3 innings, striking out eight batters. Sam Petrosian hit a 3-run homer to get our bats going. We won the game 14-7, putting us in a winner-take-all game three.

In the final game the Grays scored a run in the top of the first to take an early lead, but it didn’t last for long as we scratched one run across in four of first five innings to take a 4-1 lead. However, the Grays were able to get one run in each of the next innings tying the game going into the ninth inning. The game went into extra innings and in the bottom of the tenth we loaded the bases with no outs.

With one out, Shawn Callaway hit a high chopper to short to score winning run and the celebration was on. Mike Richards threw seven innings and had seven Ks, while Andrew Rothenberg came in and threw the final three innings shutting down the Grays offense with no runs.

In five playoff games Chris Freshcorn hit .625 with 11 runs, 10 hits (including a HR) to lead our offense. Also, Chris Caldwell had many key hits, batting.615 with 7 RBIs

This was the second title in the last three years for us and we’re looking forward to defending it in 2020.