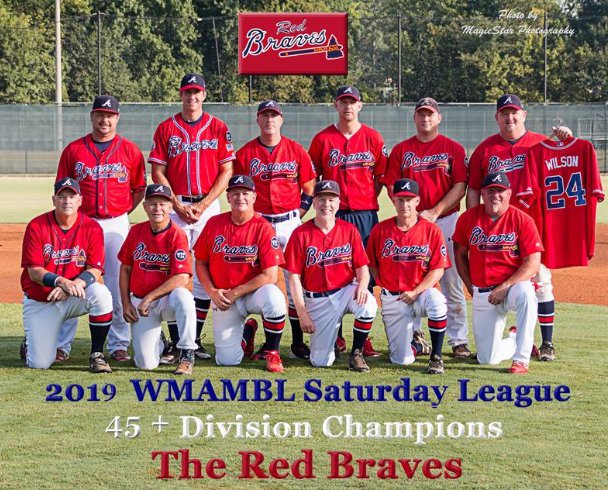 The Red Braves claim back to back championships! The championship season was dedicated in honor of our fallen teammate, friend, and former manager, Wes Wilson. The Red Braves honored Wes by continuing the culture he built – playing with good sportsmanship, a positive attitude, and winning on the scoreboard.

First year manager Brian Rusch said, “It was an honor to take over the team after the untimely death of my lifelong friend, Wes Wilson. He assembled a great group of guys that made it easy and fun to come to the ballpark every week. He was with us in spirit as we took the field each week. The team played great all year long and had a great attitude competing with a bunch of great guys in our league. I look forward to continuing the tradition next year.”

The Red Braves compiled a 12-1 regular season record with contributions from everyone on the team. Often shorthanded due to injuries, the team relied on a deep pitching staff, solid defense, and timely hitting throughout the regular season.

In the playoffs, the Red Braves took the semi-final game 12-3 over the 715 Braves with solid pitching from Matt Novis and Troy Hodges. The two combined to scatter six hits over eight innings with seven strikeouts and one walk. The Red Braves racked up 13 hits in the winning effort.

In the final game, the Red Braves beat the Smyrna Cardinals 15-1 behind a masterful pitching performance from Matt Novis. Matt pitched a complete game allowing no earned runs while striking out six and allowing just one walk. Matt pitched his way out of trouble the first two innings before settling in and allowing just five base runners over the last seven innings. The Red Braves took an early 5-0 lead. But the game stayed close until leadoff hitter and former Atlanta Falcon Brian Finneran broke the game open with a two out grand slam over the right field fence in the bottom of the seventh inning. Finneran went four for six on the day, with two doubles in addition to his big fly. Hits came throughout the lineup as Matt Novis singled. Troy Hodges had two hits, including a double. Jim Jones had two hits and a walk. Scott Donahue added two singles. Craig Schilling had a double. Scottie Bryan and Phil Balzer each added a single.