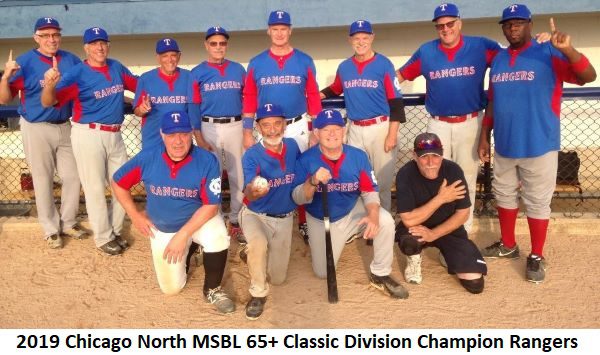 ‘Robin and Gordon Drive in Tying, Winning Runs in Extras’

In exciting extra inning walk-off fashion, the Rangers were crowned champions of the Chicago North Men’s Senior Baseball League (CNMSBL), 65 Classic Division. Initiated by Mike Haase and Ranger teammate Dave Schulz, with the active engagement of Commissioners Bob Friedman and Steve Obert, and the support and encouragement of CNMSBL President Max Reising, the 65 Classic Division played its inaugural season in 2019 with four teams.

Messrs. Haase, Friedman and Obert did a remarkable job of organizing the division, especially in ensuring that the teams were competitively balanced. The team records and closeness of nearly all the games reflected that balance. For all that, all the members of all the teams were extremely grateful.

The Rangers finished in third place in the regular season standings. The single elimination playoff to determine the division champion pitted the first place Padres against the fourth place Giants, while the second place A’s faced the third place Rangers. Perhaps somewhat surprisingly, the Giants and the Rangers won their games and advanced to the final to determine the champion.

The championship game lived up to every expectation that anyone could have had. Giants ace Will Rosales held the Rangers in check, allowing only two runs in his four innings of work, while Rangers starter John Keith yielded four runs in his four innings, handicapped by some defensive miscues. The Rangers, aided by some walks, a perfectly executed bunt single by Dave Schultz and a huge double by hitting star John Keith, tallied four runs in the fifth to take a 6-4 lead. Neither team scored in the sixth but in the top of the seventh inning, walks and an infield single enabled the Giants to tie the score. Closer Wes Monty recorded the final out of the inning, leaving the bases loaded. The Rangers went down 1-2-3 in the bottom of the inning so the game went to extra innings.

In the top of the eighth inning, pitcher Wes Monty, tiring somewhat, gave up some walks and a single, allowing one run, but again leaving the bases loaded. In the bottom of the eighth, though, the top of the Rangers order exploded. Wes Monty reached on an error and John Keith (remember him?) blasted still another double, his third of the game. After an intentional walk to Ray Huard, Neil Robin, who had also made a spectacular running catch in left field to close the fifth inning, stroked a single, driving home the tying run. Rick Gordon grounded to second but John Keith beat the throw and slid in to score the game winning run. The excitement was palpable.

The Rangers are proud to have been crowned champions of the new division but in particular congratulate the Giants for a terrific performance in the playoffs and congratulate all the teams for a fun season of close competition.