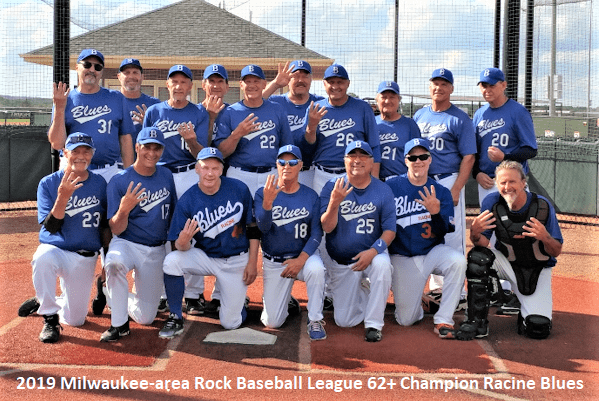 The 2019 Racine Blues of the ‘Rock Baseball League 62+ Division’ set out to not only win their fourth straight league championship but to win every game in doing so. Our manager, Dan Nicholson had to take a year off for surgery and we wanted to ‘win it for Dan’. I was asked to manage the team with help from John Becker and Vince Renna. I agreed to do so and with the help of John, Vince and many of the team’s players did what we set out to do.

The BLUES finished their quest for an unprecedented fourth straight 62+ title by beating the Brewers 8-7 in the second game of a two of three series in what turned out to be a nail biter. After steadily building an 8-1 lead through 8 ½ innings we almost let it slip away in the last of the ninth when the pesky Brewers came roaring back to get six runs and have the tying run on second with their leadoff batter up. Cool as usual Bill Alber calmly struck him out for the victory in a storybook season that saw the BLUES win their fifteenth straight game to sweep the season. 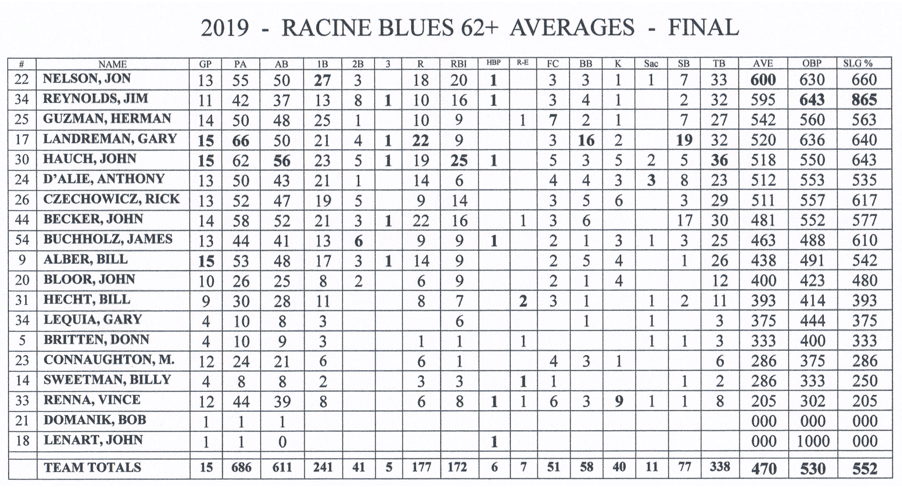 Neither team was to score in the first two innings. In the third the BLUES struck pay dirt after two were out. Bill Alber led off the inning with a hit and stole second. The next two batters made out then Gary Landreman walked and stole second to set up the table for Jon Nelson, who delivered with a double to plate both Alber and Landreman. John Hauch then doubled in Nelson while Rick Czechowicz singled in Hauch and the BLUES were up by four. In their half of the inning the Brewers came back with one of their own.

From there on it was all BLUES. In the fourth we scored one more on a double by Buck Buchholz, a walk to Jim Reynolds, and Bill Hecht reaching on a Brewer error, loaded the bags. Alber then coaxed a walk to push Buchholz in.

The sixth inning found the BLUES on the hunt again. Czechowicz doubled, Herman Guzman singled him in and Buchholz walked. With runners on first and second Reynolds hit a shot to third that the third baseman handled and got the force at third. Bill Hecht followed with a shot to short that forced Reynolds at second but the Brewers were unable to complete the double play and Buchholz scored. Alber singled again and Vince Renna followed with another single to load the bases. John Bloor then singled in Hecht to run the score to 8-1 BLUES.

The scoring ended there for the BLUES and the Brewers were quiet until the ninth. With a seven-run lead the BLUES thought it was over, but the Brewers had other ideas. The first batter walked but the next batter hit into a fielder’s choice. The next two batters singled to load the bases and the next batter managed to walk, forcing one run in. The next batter popped out to first on a great play by Reynolds. The next batter, who had done nothing up to then, singled to drive in two more, which brought manager Dave Froehlich to the mound for the second time and Alber came back in. The next batter appeared to hit the game ending grounder to short but was ruled safe on a catcher’s interference. The next Brewer batter hit a grounder to second that was bobbled and the tying run went to third with the batter on first.

Alber was then called for a balk when the second base ump said he jiggled after he set and the runner moved to second while the sixth run of the inning scored from third. Then, with the tying run on second, leadoff batter Mark Bichanich came up for the Brewers. Alber then dispatched him with three great pitches. The place erupted in cheering as the BLUES completed a miracle season going 15-0. It was the first time this was ever done in this league. AWESOME GAME.

Managing this team was one of the easiest things I have done. We won all 12 of our league games and then finished by winning all three playoff games. In the process, we outscored our opponents 177-55. The team batting average was .470. This was truly a team effort and shows what can be done when shooting for a goal regardless of how huge.