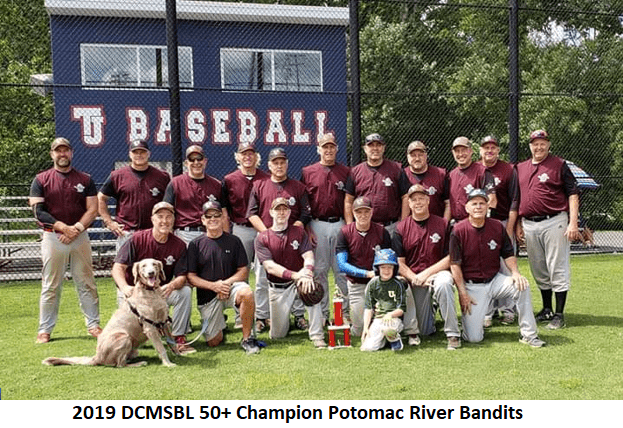 ‘Jaekle Shines on the Bump and at the Plate’

For the fifth straight season, the Potomac River Bandits won the DCMSBL 50+ tournament championship. In a rematch of last year’s 14 inning championship game, the Bandits were able to score early and often to take an insurmountable lead over the DC Nationals in route to a 14-3 victory. Steve Jaekle threw a complete game, giving up three runs, two earned, while striking out seven. Jaekle also had three hits and two RBI in the game to pace the offense. Mike McGlaughlin scored three runs, while Pete Cressy and Dave Thune chipped in with two hits and two RBI each in the victory.

The Bandits jumped out to an early 5–0 lead off Nationals ace Terry Lonjin, then exploded for nine runs against a series of relievers over the next two innings to build the insurmountable lead. Ron Barckhoff, Dan Cassidy and Lonjin started a rally in the fifth but Jaekle was able to hold the Nationals to just two runs.

“This was the toughest season thus far for the Bandits,” said Coach Frank Cappello. “The talent in this league is always improving and there were at least three teams who could have ended up champions this day instead of us.”

“Jaekle was amazing today. This Nationals team beat us twice in the regular season so that makes his performance today even more impressive.”