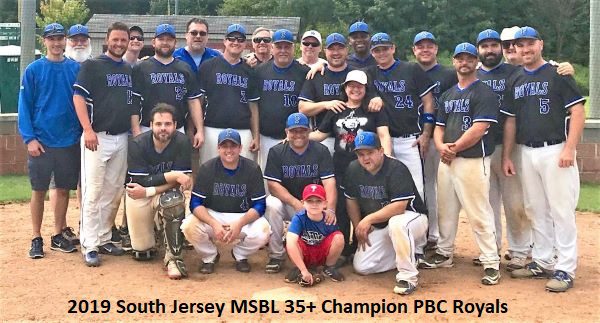 The 35+ PBC Royals defeated the Mount Laurel Mayhem by a score of 5-2 in game three of the finals to secure their first ever 35+ Summer league championship after four previous 35+ final appearances.

After scoring four runs in the second inning and one in the fourth, the Royals held on after a late charge by the Mayhem who scored one in both the sixth and seventh and left the bases loaded in the ninth.

The team was led by the pitching of Steve Porrini, Jr. and timely hitting of John Slinka. Porrini pitched eight innings, giving up seven hits, one walk and two earned runs. Slinka had a two out, 2-run single in the fourth to push the lead to 4-0. Fausto Rosario closed it out and Tom Kivlin made two huge defensive plays at short.

The Royals finished the regular season 16-0 and the top seed in the playoffs. They rolled through the semifinals, entering the championship 18-0 only to suffer their first loss in game one of the 3-game finals, 9-6. This was the most runs they gave up all season.