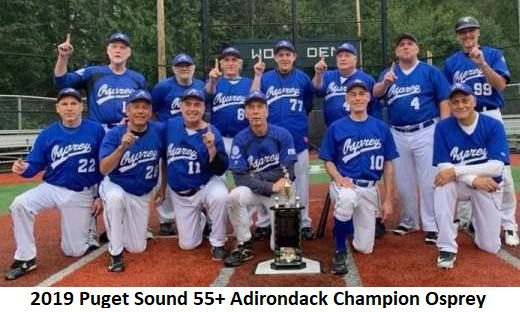 The Osprey of the Adirondack Division capped off an undefeated regular season by grabbing the 55 and over rec title with a 16-5 playoff win over the Mavericks. Eric Johnson and Ed Anderson were the hitting stars going 4 for 5 and 4 for 4 respectively. Mike Lindberg added two hits and two RBI while pitching a complete game for the win. He gave up a single earned run while scattering 10 hits over nine innings. Lindberg finished the season with a stellar 13-0 record on the mound.

The core of the Osprey has been together for several years. The team excelled on offense throughout the 2019 campaign and their defense was key. The Osprey had several games in which they turned five or more double plays. The combined regular season and playoff record for the squad was an amazing 21-0.

One of the Osprey, Richard Harris, passed away a few weeks before the season started. GM Bruce Morrison missed the season recovering from an illness as Ed Anderson stepped up to run the team, which dedicated the season to Harris and Morrison.

Of note for the runner-up Mavericks, their regular season batting leader was Tom Layson, who finished the year with a gawdy .607 average while posting an OPS of 1.466.