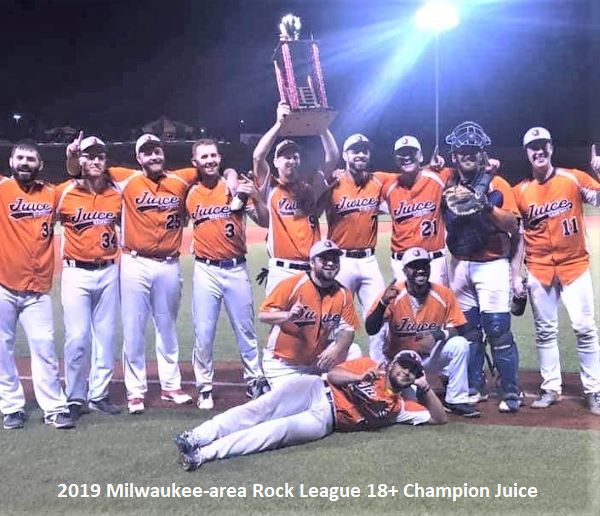 The Juice are very proud to call themselves the 2019 RLB 18+ Division Champions!

The 2019 Championship Series featured a rematch of the 2018 League Semi-finals, with the Juice besting the Warriors in a decisive game three. Behind the arm of Joey Esposito, who threw a complete game shutout with 10 K’s, the Juice edged the Warriors in a tightly contested 1-0 victory.

The “Juice,” whose team name is inspired by the phrase “Join-Us-In-Creating-Excitement,” are a sixth-year team in the Milwaukee-area Rock Baseball League. After scuffling to an inaugural season record of 1-18 in 2014, the Juice have steadily improved year by year to capture their first league championship in team history.

Josh Jesko (.440 avg., 22 RBI) and Andy Abromaitis (.410 avg., 21 RBI) led the offensive charge throughout the season, while Esposito (7-1, 1.74 ERA) and Austin Higgins (9-3, 2.04 ERA) anchored the rotation. These four players’ efforts led to their selections as all-stars for the 2019 season as well. However, it was a collective team effort which led to the Juice accomplishing their highly sought-after season goal after falling just short a year prior: a league championship!

Thanks for a great season fellas!”