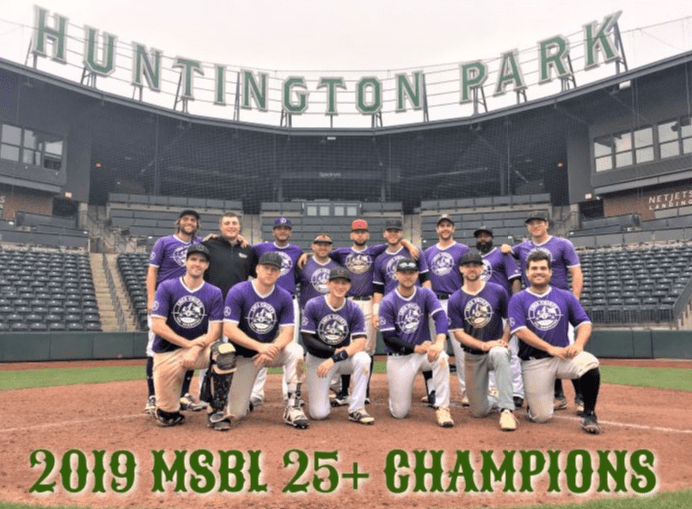 Cleveland’s Inca Chiefs won their first championship of their near 15 year history by defeating perennial national power Steve’s Sports in a wild two game series. After winning the regular season opener against Steve’s 2-1 and then again the season finale against them 9-3 to secure the #1 seed, they faced the daunting task of needing to win back to back games on the final Sunday, after losing 2-1 earlier in the playoffs to a strong upstart NEO Sports squad and having to play back through the loser bracket. Going 4-0 against the defending champs in one year seemed a tall ask. They had barely survived the ride the weekend before, needing a two out, full count RBI triple in the 9th inning by Cory Finkler to tie the game, before winning it in extras. They were able to exact revenge for their loss to NEO immediately after that game by beating NEO handily 9-4, setting up their championship showdown the following Sunday. Missing four key hitters (Cory Finkler who led the team in HRs, Christian Brandetsas who batted .360 and was in the top two in runs and RBI’s, Mike Henfling who had hit .700 in the playoffs as well as been stellar behind the plate, and John Kosko who hit .341) and facing a loaded Steve’s lineup, their stellar hard throwing 4 man rotation would be key, as pitching and defense had carried them all year. Crucially they jumped out to a lead on a two run double in the first inning by catcher Richie Perez, setting the tone for game 1. They extended it with 5 more runs in the fourth with hits from Mitch Zofka and Brad Forward, plus a number of walks. Jim Solano, who was the winning pitcher of record in the regular season finale, started on the mound, mixing his mid 80s fastball and big curveball to limit them to no runs through those 4 innings. Ben Pope, the Chiefs most dominating starter all year with his mid 80s fastball and wipe out slider, pitched through to the eight allowing 3 runs. Tyler Finkler, relinquished his SS duties in the 9th to resume his closer role, where his 90 MPH fastball closed out the game. The final inning was not without drama, as Mitch Zofka made a diving catch in left for the final out with two men on and the game still at 7-3. He banged his head hard on the turf of the brand new Jim Thome All Star Complex, but managed to hang on. Unfortunately, he was not able to hang on till the second deciding game, as nausea and dizziness required him to be taken to the local hospital to monitor for concussion. Now down another key player the Chiefs did what they had done all season, find a way. Ace pitcher Ben Pope from game one, was inserted in the game to hit in Zofka’s spot and the defense was shifted around as longtime veteran and manager J. Ambrozic shifted from second to left field.

Chiefs shifted to the home two for the deciding game and innings eater Josh Armbruster took the mound. Notorious for long at bats and grinding through games with his mid 80’s fastball, slider, and change. Steve’s did jump out to a 3 run lead with a home run in the first, and some of the crowd started to thin thinking the depth and talent would finally start to show its face, as Steve’s also inserted some of it’s younger players for the big final game. But the Chiefs answered in the bottom half with two runs of their own, with RBI singles from Roger Prettyman and Alex Perella. These two hits and answering the early runs were key to the championship. Steve’s countered with three more runs in the second, and the crowd thinned some more. But again the chiefs countered with a run to make it 6-3, and made the last out on the base paths. Ambrozic settled the team down, imploring them to trust each other as they had all year. Armbruster worked out of a bases loaded, no out jam in the fourth, getting a ground out coming home, a strike out and a play at first. It was a huge momentum swing. Again the coach brought the team together, saying the next team to score

was certain to win. Finkler led off the 5th with a single and after a sac bunt and fly, the only other original Chief along with Ambrozic, 43 year old Brad Forwad’s two out single made the game 6-4. After a couple hits and walks, a bases loaded HBP in the 6th made the game 6-5. With Ambrozic shifted from second to the outfield, Andy Hawkins and Matt Milward shared duties at second, Hawkins’s having a key hit and Milward turning a huge double play to end the 6th. With two on and one out in the 7th, 41 year old Chiefs founder Ambrozic hit a line drive single to right to tie the game. From there the flood gates opened after relinquishing the seemingly insurmountable lead, Pope, Finkler, Perella and Zeus Roldan all had hits to take an 11-6 lead. Armbruster settled in and never gave up fighting, allowing one meaningless run in the ninth after the six early ones, for the complete game victory. Poetically, original Chiefs Ambrozic and Forward, 84 years old between them, accounted for 8 of the 18 runs scored that day, with Forward 4-5 in the crucial final game including two doubles and a lumbering triple. Pitcher Ben Pope, “forced” into the lineup of game 2, finished 4-5 with two doubles and two RBIs. In the deciding game Finkler finished 4-5 with 5 runs accounted for, as did Perella finish 3-3 with 4 runs. Every player in the lineup had a hit in game two. The Chiefs, like they had all year, like they had the last 15 years, never stopped believing they could win the championship.