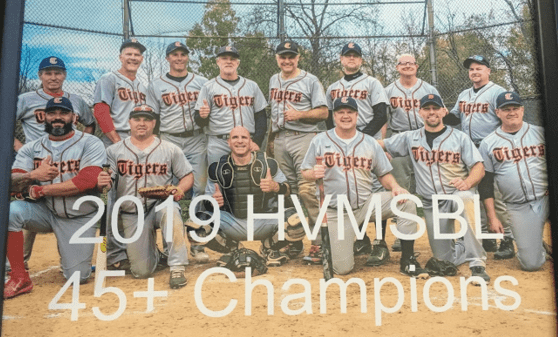 Our season started back in February with indoor workouts. The official start to the season was delayed by five straight weeks of rainouts with the season finally starting on May 18th. The Tigers rattled off seven straight wins, including a couple of big wins against last year’s champion Isotopes.

It wasn’t until July 6th that the team suffered their only loss of the year, a one run loss to the Sharks. That game provided a mid-season wakeup call and the Tigers rattled off another 10 straight wins including two playoff wins.

The championship game pitted the 15-1 Tigers against the 13-3 Isotopes (all 3 Isotopes losses were delivered by the Tigers).

The Isotopes took an early 1-run lead in the first inning with three hits. The Tigers answered in the bottom half with an RBI single ripped by RBI league leader Dave Rambo (.500), knocking in Sean Lyons (.521).

The lead changed hands again in the fourth when the Isotopes took a 2-1 advantage. The Tigers battled back with a run in the sixth as Jim Luciano (.485) singled home Rob Martin (.469).

In the top of the eighth the Isotopes had a runner on first with no outs and Chris Whitten smashed a ball up the middle but I was able to snag it and turn it into a double play. In the bottom half of the eighth Dave Rambo once again came through with a clutch single scoring Sean Lyons and Camilo Antonini (.514) to complete the scoring.

Sean Lyons had a big day with three hits, including two doubles. Rob Martin, Dave Rambo and Steve Froehlich (.351) all had two hits.

The Tigers played a solid defense and Mark Milroy pitched well enough to win for the Isotopes. I was fortunate enough to go the distance on the mound to finish the season with a perfect 12-0 record.

All 14 members of the Tigers contributed to our overall 17 -1 record getting contributions from everyone. We can’t wait for the 2020 season to start!