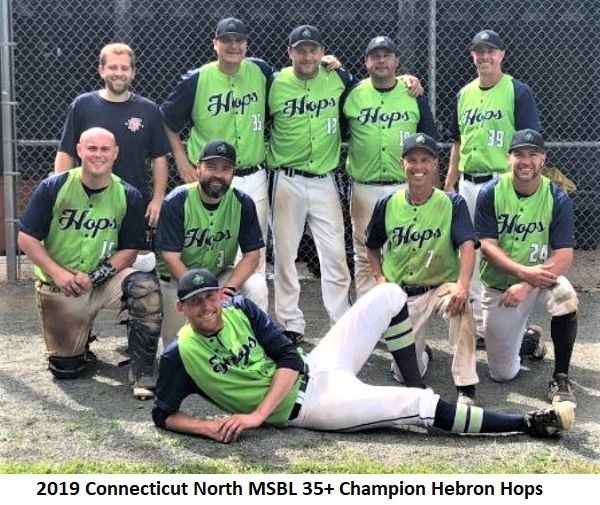 ‘Hops Make It a ‘Five Peat’

The Hebron Hops, formerly the Hebron Nor’Easters, finished off the 2019 season by beating the Rocky Hill Caps in the league finals. The Hops went 21-5 en-route to their fifth consecutive 35+ league championship.

The Hops had to battle injuries and losing key players throughout the regular season, but were still able to accomplish their preseason goal of a fifth title.

In the first round of the playoffs, the Hops faced a new 35+ team in the Granby Cubs. Game one was close, with Hebron winning 7-6. Game two was an easier win, as the Hops won 14-2. In the semi’s, Hebron took on a much improved Bristol Mustangs team. The Hops pitching was too much as Hebron took both games, winning 7-1 and 4-1.

In the finals, it was a third consecutive matchup, between Hebron and Rocky Hill. The Hops scored early and often and handled the Caps in game one, 16-5. Game two was a tough fought battle with Hebron winning the championship game 9-4.