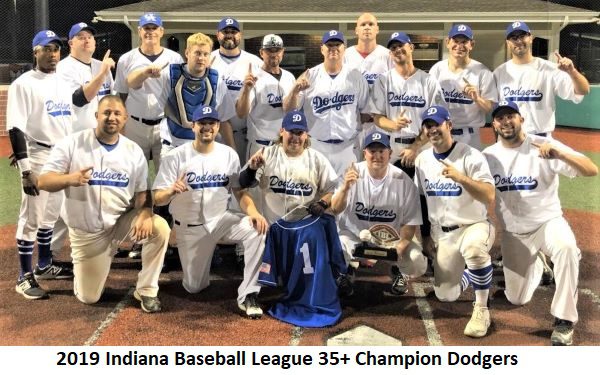 The Indiana Baseball League 35+ Dodgers defeated the Rangers 10-5 to clinch their first ever championship. Although this was only their third year in the 35+ division, many of the players began playing in the MSBL together over 15 years ago. The team finished 9-5 in the regular season, getting swept in a double-header on the final day to fall from second place to fourth. That set up a tough semi-final matchup with the Titans, who had won three consecutive league titles. The Dodgers were able to win 10-2 behind a strong pitching performance from Adam Wheeler, a former Yankees prospect. 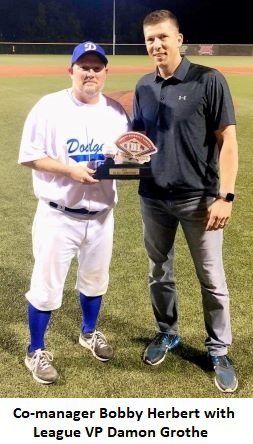 In the championship, the road didn’t get any easier as the Rangers were appearing in their sixth consecutive championship game. The game was back and forth until the seventh inning. The Dodgers were trailing 5-4 but started a rally with two outs. An error, a walk, and a hit loaded the bases for eighteen-year league veteran Matt Matheis. Matheis promptly delivered a line drive single on the first pitch to plate two runs. The Dodgers added four more to runs to put the game out of reach. Jason Combs went the distance on the mound to earn Co-MVP honors alongside Matheis. It marked the third consecutive complete game by a Dodgers pitcher this postseason, following Jason Wuerfel’s 9-inning gem in the opening round against the Patriots and Wheeler’s wire-to-wire performance in the semis against the Titans.

For many, this was a career championship as much as it was a season championship. Managers Bobby Herbert and Erich Rusie, along with pitcher Robert Allen, second baseman Jerad Tallman and first baseman Scott Friedline had been chasing a league title since 2003. The majority of the roster has been together for six years while standout Matt Burke has been in the league since 2004 and is one of only two players with a previous championship, along with Wheeler.

This championship was also a tribute to a teammate that the Dodgers lost in the middle of the 2018 season. Trent Conn, who died in a car accident last season, was a high school teammate of Jason Combs and college teammate of Erich Rusie. He was a husband, father, school teacher, coach, ballplayer and so much more. If this title means anything at all, it means the club found a way to honor Trent’s memory.