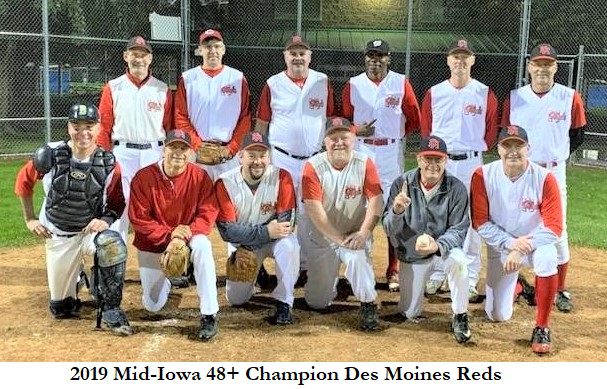 ‘Smith and Anderson Shut the Door from the Bump’

Our season was really one of two tales. We started out trying to grow our team and the league, adding five new players who hadn’t played hardball in over 20 years. Many guys were very rusty to say the least. But we kept getting better throughout the year, losing several close games during our 0-10 stretch. No one ever got discouraged or said a negative thing about each other. Everyone just played hard and had fun. The team’s perseverance paid off with a season ending four game winning streak, outscoring our opponents 28-12, and winning the league’s 48+ championship. The final game score was Des Moines Reds 5, Des Moines Yankees 0. Phil Smith was voted team MVP, the winning pitcher in all four games during our title run. Warren Anderson earned saves in all four games. The Reds leading hitters for the tournament included Scott Etzel .728, Warren Anderson .667, Matt Kamp .555, Don Caves .500, with Keith Springer, Gary Frank and Raun Taylor each hitting .400. 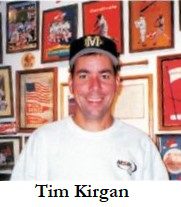 I would add a few things as well if I may. Warren Anderson, Keith DeWitt, Gary Frank and myself are all original members of the league, which was started in 1994. We believe we are the only players that have played in every season of our league’s existence, 26 years. We also believe each of us has now won over 40 league championships (regular season and playoffs). No one knows for sure and I don’t think any of us really care. We are all very thankful to be in good health and just enjoy being able to continue to play baseball.

I also think it is worth noting that this 48+ division almost didn’t happen! In the spring of 2019, Warren Anderson and I attended league board meetings and pushed hard for the league to form a 48+ league while keeping its previous 42+ division, too. The purpose of this of course was to provide a safe, quality league for players of all ages to play baseball. Surprisingly this idea was met with resistance as board members did not believe our older league would have enough players. The league previously had six teams in one 42+ age division. The result for the league, however, was an increased membership with more guys playing baseball, and an increase in the total number of teams age 42 and over, from six to eight (four teams in the 42+ division and four teams in the 48+ division). Our vision paid off as the midweek league grew by two teams with many new players, that had not played in years, coming back to once again play baseball. While we are proud of our success on the field, Warren and I are both also very proud that we were able to help provide quality baseball for older adults in central Iowa.