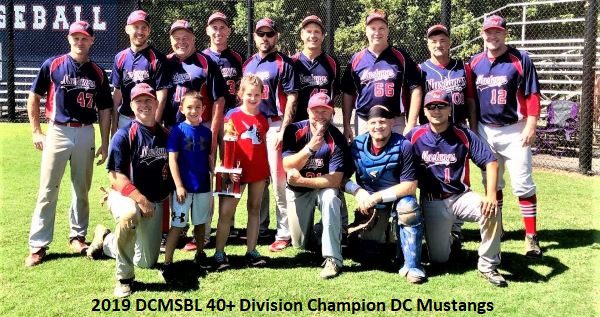 ‘Clough and Gleason Take Control on the Bump’

The DC Mustangs run to our league’s 40+ division championship was not an easy one. At the end of June we were at 4-4. But in July and August through the rest of our season and the playoffs we reeled off eight straight wins. Our turnaround was a complete team effort as most championship teams are.

The Mustangs hallmark defense was led by Jim Johnson catching all of the playoff innings and Sean Cohan coming up with the ‘over the shoulder’ catch of the year in left center to shut down the opposition’s attempted rally. The rest of the team played an errorless final game. Dan Cassidy and Omar Arelano anchored our infield, while Dave Kaufman and Jody Brookover cornered up the outfield.

The Mustang season offense was led by Robert Smith, who had a .621 OBP, and Ron Barckhoff, who scored five of the nine total runs that we scored in the two championship games. Steve Socha, Dan Craig, John Phillips and Terry Lonjin all delivered big hits in the playoff run.

Looking forward to next year, as we get Joe Walsh, our field general, and Paul Alexander and Rick Beizer, our longest tenured Mustangs, back from the injured list, we expect to repeat as champions again. We really appreciate the efforts of Jerry Klemm, Larry Lombardi and our recently deceased dear friend Roger Stanley as the DCMSBL management group for giving us a chance to still play the greatest game on earth!

I am forever grateful to have been a member of the Mustangs and MSBL!