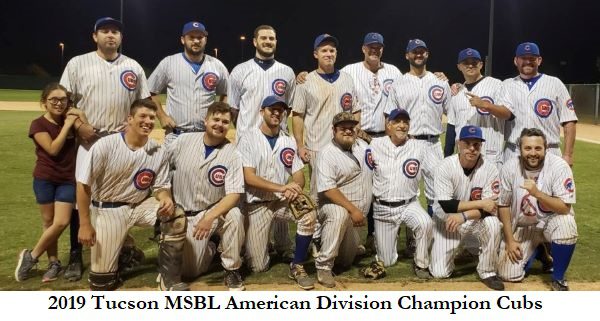 The Cubs defeated the Twins 11 – 6 in the championship game. Mark Phillips got the win with Gabe Frankel closing it out. This team is nearly the same team that lost in the 2016 Championship in 17 innings. Due to weather issues and several league tragedies, this season was long and full of emotion. However, teams played on and made the best of it. The Cubs started the season slow but gained momentum as the season went along. We did not lose a single playoff game in the final weeks of the season. Our pitching work horse was Mark Phillips (with 61k and an ERA of 3.33 in 54 innings) who had help all season from Gabe Frankel, Joey Rohe and Mike LaChappelle.

This year’s Cubs defense was also outstanding both on the dirt and the grass. We saved many games with solid fielding to support our pitching. Pete Parillo, Kyle Ivanoff and Ben Fife took turns behind the dish all season which helped keep each our catching core fresh. Several Cubs players also got picked up this year to play in the MSBL World Series in Phoenix.

This was my 17th year with the Tucson MSBL and my 16th year as Cubs player/manager. This is without question the finest team I have ever had the privilege of playing ball with. Their teamwork and teammate support was something to see. It is just an outstanding group of ball players and men whom I could always count on. We also won the Central Division Championship in 2004. The Cubs are looking forward to defending our Division Championship in 2020.