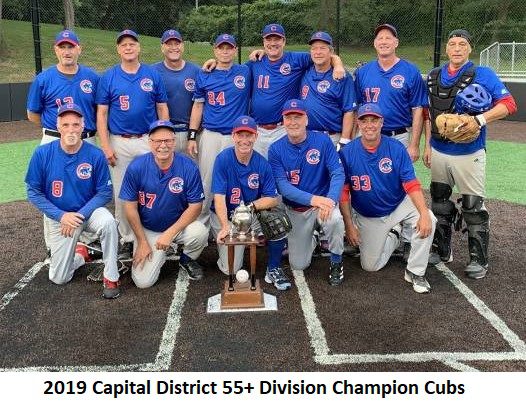 The real story of this championship was that the 55+ Cubs were finally able to unseat the 5-time defending champion Giants after going just 7-8-1 in the regular season, qualifying as the #4 seed for the final playoff round. The previous year, the Cubs went 15-1 through the regular season, but were thwarted by the Giants in the finals in a thriller of a final game that wasn’t decided until the final out.

After that disappointment, the Cubs joined forces with the Giants, along with a few guys from a couple of other Capital District teams, to put together a 2018 Fall Classic 55+ team that made it all of the way to the championship game, losing to the Puerto Rico Athleticos in the final.

The disappointment from those two finals losses drove the Cubs to work on improving enough to “get over the hump”. Well, the 2019 season was fraught with disappointing loss after

The Cubs outscored their first three playoff opponents 42-19 in becoming the sole survivor in the winner’s bracket. They beat the #1 seed Whiz Kids and Giants in that run. The Giants won their way through the loser’s bracket to face the Cubs in the finals. They would need to beat the Cubs twice, as the Cubs would need to win just once. The first game saw the Giants manhandle the Cubs 12-3 behind a great performance from the Giants ace, Ron Massaroni. The win brought about a winner take all game, that promised to be intense. It was!

The pitchers for both teams were on their A-games. Giants starter Darrell Duncan had a terrific knuckle ball all night long, keeping the big bats in the Cubs order quiet all night long. Cubs starter Mike Girard gave up just four singles and two walks to a team that had never been shut out in their history. The Cubs used a surprise rally with two outs and nobody on in the second inning. Andy Hoyle walked and stole second to start things off. Jerry Rosen then drove him home with an RBI single. His shared player, Al Williams, then stole second and was driven home on a single by Jon Martin.

The game would remain at 2-0 until the top of the sixth inning, when Andy Hoyle hit an inside the park home run for the Cubs to make it 3-0. The Giants would not go quietly! Having only mustered two singles (by Will Ferguson and Darrell Duncan) to that point, the Giants would get their rally started with a one-out walk to Tony Nardacci. Tony then stole second and one out later Will Ferguson drove him home with his second single on the night to make it 3-1. Girard would get out of danger with the help of third baseman Ron Lochner, who made a diving stop of a hard smash in the hole, getting up in time to force the runner at second to end the inning. 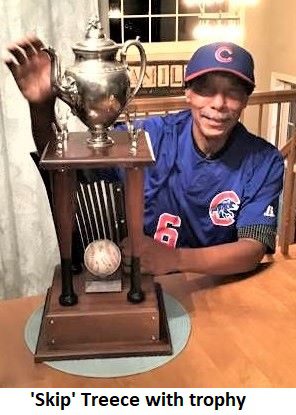 The bottom of the seventh again had the Giants fighting hard to get even. Darrell Duncan led off with a single, and after one out Ron Smaka lined a ball into right center that looked like it would fall safely in front of the Cubs’ center fielder. That is when right fielder Paul Miles came streaking in for a great running catch that frankly nobody else in this age division would have gotten close to. The final out came on a come backer to the mound and the Cubs’ celebration was on!

The Giants were true gentlemen and great sports in defeat (something that they hadn’t needed to practice in the past five years). Now, we will get together as teammates and friends to try to wipe out the 2018 Fall Classic disappointment with a championship in 2019.

With this win Kevin Jackson got his first championship after many years in this league while 68-year old Frederick “Skip” Treece announced his retirement before the final game, as he was unable to attend that game. Both of these players were a great inspiration to the other guys on the team. We just couldn’t let these two guys down!