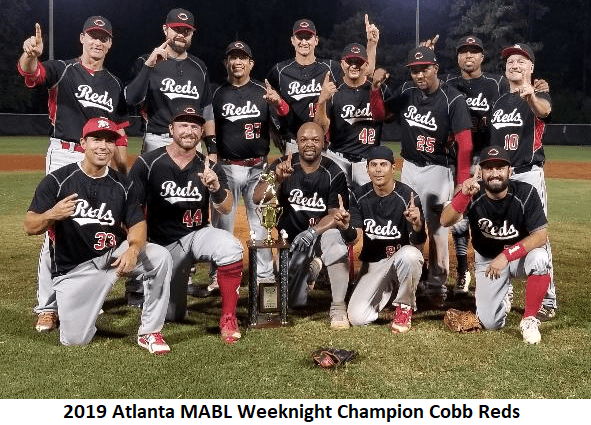 2019 Cobb Reds have won the 35+ championship of the Atlanta MABL four of the last six years. This season featured some incredible come from behind victories against the 18+ league in crossover games. The Reds finished the season with a 12-3 record, with two of the losses coming against the rival Dodgers earlier in the season.

After securing the #1 playoff seed, the semifinal game was played against the pitching dominate Expos. In a time-shorted playoff game, the Expos got out to a 7-0 lead by the top of the fourth inning. The Reds scored two in the fourth and then tied it with five runs in the fifth inning. With time running out in the bottom of the sixth inning and a tied ball game, the Reds came through with two runs to put themselves in the championship game versus the talented Dodgers club.

The Reds starting pitcher Reggie Barrau continued his impressive outings against the Dodgers hitters. With some clutch hitting by Cuba Hernandez and Alex Ramirez and a back breaking 2-run blast by Josh Colliver, the Reds cruised to an 8-5 victory to secure the championship.