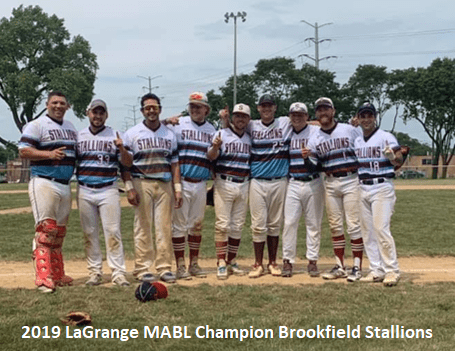 The 2019 Brookfield Stallions sweep through the Lagrange, IL MABL playoffs with a 4-0 record to win the championship versus the Brookfield White Sox!

The Brookfield Stallions began the 2019 baseball season 1-2, but then went 14-1-1 their last 16 ball games, including reeling off their last seven in a row. They ended the regular season 15-3-1. They overcame the early season injury to their starting left fielder, Brian Sopczynski, but were able to get him back towards the end of the season. The Stallions maintained steady offense and sharp defense all season long, but they could not have done this good of a job without their consistent 4-man rotation. John Barnes, Jonny Kleinmeyer, Kyle Halverson and Adam Martinson were workhorses throughout the season and allowed the Stallions to be in almost every single game. During the regular season the Stallions had a couple of huge wins, one including a walk off win against the Buddies to open the season in which Scottie Olsowlka had a 2-RBI single in the bottom of the seventh. Another coming in the mid-season in which the Stallions beat the Outlaws with only eight players. TJ Little had a huge hit down the left field line to complete the walk off victory.

From individual leader standpoints, Jonny Kleinmeyer led the Stallions in home runs with two and finished second in batting with a .414 average. Keith Halverson led the team in batting and hits, with a .524 average and 43 hits, respectively. Keith also finish second with five stolen bases and was first in doubles with nine. Kyle Halverson led the team in innings pitched, led in stolen bases with seven, led with two triples and finished tied for 3rd in batting with a .387 average. Scottie Olsowlka ended with a .387 average to tie Kyle for third in batting. Joe Hnojsky batted .375 and finished second with five doubles. Lastly, the Stallions had two other players bat above .300; Dave Sopczynski hit .301 and TJ Little hit .364.

The playoff run started with a matchup versus the Thunder. The Stallions won 6-2 behind eight strong innings by John Barnes, compiling six K’s. Kyle Halverson finished off the ninth innings 1-2-3. The offense was led by Keith Halverson and TJ Little in this one. TJ Little had a key 2-RBI double in the first inning, which led him to a 3-4 night. Keith went 4-4, including a 2-RBI double in the eighth to help seal the victory. Dave Skowronski was 3-4 with a double and Dave Sopczysnki added two hits for the team.

Game two was against the Chargers, in which the Stallions won 7-3 behind a complete game performance by Jonny Kleinmeyer, including 11 K’s. The Stallions opened the scoring with Keith 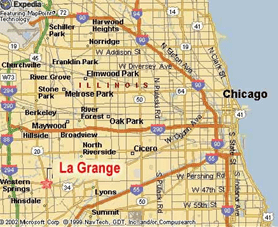 Halverson and Dave Sopczynski scoring on the same passed ball in the fifth inning. From there, Scottie Olsowlka and TJ Little each had two hits to help the Stallions score their seven runs.

Game three was an 8-2 victory over the Red Angels behind a complete game job by John Barnes. This game the Stallions were able to chip away at the Red Angels all game, including multiple hits by Keith, Kyle, Dave Sop., Scottie, Jonny and Adam Martinson. In the championship, the Stallions beat the White Sox 12-7 to finish off their season! Jonny Kleinmeyer pitched all nine innings to lead the way. The Stallions had a huge six spot in the third inning and a crucial 4-spot in the sixth. Kyle had three hits, including a triple. Joe added three hits, including a huge 2-out single with the bases loaded in the third inning. Lastly, Adam Martinson and Dave Skowronski each had two hits to help the Stallions to the win!

The Stallions are the 2019 LaGrange MABL champs!