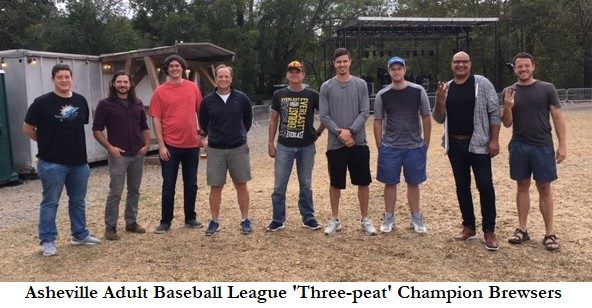 The Asheville Adult Baseball League 18+ (AABL) crowned the Brewsers for the third straight year as champions. Brewsers outscored opponents 39-7 in four post-season games with the finale being a 3-2 pitcher’s duel.

Josh Hall led the Brewers to victory on the hill. He went six and a third innings, allowing two runs on six hits and striking out six while throwing 124 pitches. Christian Lindsey threw two-thirds of an inning in relief out of the bullpen sealing the deal and recording the save. The Brewsers tallied 11 hits on the day. Rick Sichta, Chris Sabol, Wes Aulet and Hall collected two hits each. The Brewsers didn’t commit a single error in the field. Three-peat complete!