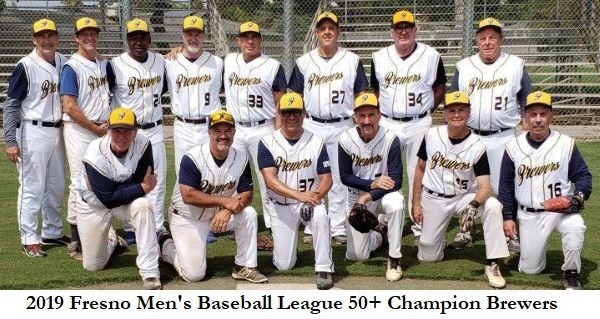 ‘Weinberger Wraps Up Championship from the Hill’

The Brewers and the Giants played many competitive games against each other in previous seasons and both teams faced multiple player attritions in the 2019 season. Both teams decided to combine players to make up the 2019 version of the Brewers. This version of the Brewers had good team chemistry and came together to win the regular season Bill Beckman 50+ Division and earn the #1 seed for the playoffs.

In a semifinal game, the Brewers attempted a difficult season sweep of the Grizzlies. The Brewers took an early lead by scoring three runs in the first inning but the Grizzlies clawed their way back and were only down by a run heading into the fifth inning. The Brewers then broke it open by scoring six runs over the next two innings and cruised to a 10-4 victory. Wayne Weinberger was effective by only allowing one earned run and went the distance to earn the victory. Offensively, Mike Patrick and Rick Poudrier had three hits each to lead the Brewers. Manny Jones and John Neri also chipped in with two hits apiece.

In the championship game, the Brewers faced the second-seeded Colt 45s. This game was a pitcher’s duel from the start with both teams combining for only one hit and no runs scored through the first four innings. In the fifth inning, the Brewers finally broke through with a clutch 2-RBI hit from Mitch Eisner that proved to be the game-winning hit. Roger Wilson also added an insurance RBI in the decisive fifth inning and Ron Rivas added another RBI an inning later.

This would prove more than enough offense for Wayne Weinberger, showing he was on top of his game by spinning a masterpiece. Wayne pitched a complete game gem and only allowed one hit over nine innings and struck out five.