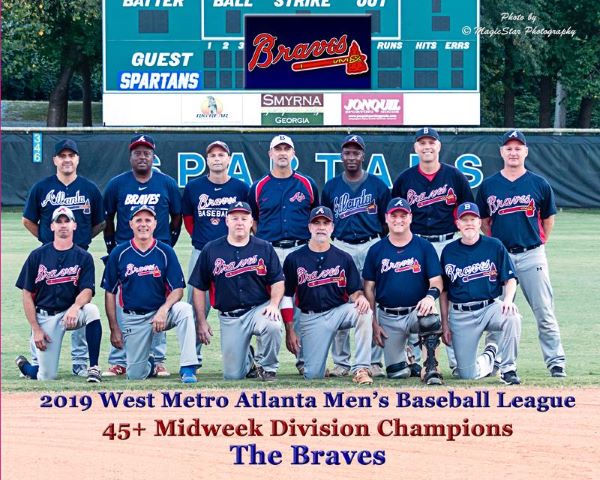 ‘MVP Tate Dominates on the Bump’

It’s been a great run since taking the helm of the only Atlanta Braves team to win regular championships over the last six years. We have a great bunch of guys who truly work together and contribute up and down the batting order as well as in the field, no matter their ability. This team has won its third consecutive championship and fifth in the last six years, in it’s typical come from behind fashion. In first place until the last three weeks of the season, the team fell to third place going into the playoffs. For some unknown reason we have never finished the regular season in first place, but that has not deterred us from our ultimate goal.

The Braves third place finish was a neck and neck competition among the top three where the teams were separated by a game and a half in the standings. For the Braves to repeat they would have to win three games and face the second and first place teams in the semi-finals and championship games.

Over the last six years Tate Pugh has moved from being an All-Star catcher to an All-Star pitcher, and it was no more evident than during this year’s championship run. In our opening series game, he held the Yankees to one earned run while the team put double digits on the scoreboard to end the game quickly and rest up for our first big challenge.

The Spikes have arguably the best hitting and speed in the league. Jumping on the Spikes pitchers early provided a 7-0 lead which the team defense would hold onto behind Tate’s 1-walk outing to finish the game at 7-2. No team had held the Spikes to less than six runs all season, and we had beaten them twice in very close games of 9-8 and 11-7. Defensive stars Steve Feldman (3rd base) and Tom Nohstadt (CF) kept the hard-hit balls in their gloves to stifle any rally that could have brought the Spikes back in the game.

The championship game was a gritty, well played match-up that we will talk about as one of the best games we have ever seen or played in. The first seven innings went by in what was to be a pitching and defensive battle for the ages with the teams taking only 90 minutes to reach the eighth inning tied 2-2. No errors, one walk, a couple of hits and some great defensive plays on both sides kept you guessing who would bend first.

The drama would rise for the remainder of the game that took only 1 and 1/4 hours to complete. In the eighth inning the Nationals hit a long ball to the fence that was brought in for a run to go up 3-2. They loaded the bases and the team held strong to keep us in the game going to the ninth. In the ninth, the speed and daring base stealing of Tony Paradiso caused an errant throw by the Nationals which would eventually allow him to score and tie up the game going into the bottom of the ninth.

Again, Tate Pugh rose to the occasion holding the Nats to a zero in the ninth so we would get an opportunity to win the game. The Nats shortstop took the mound to begin the 10th. We knew that this was our moment to put the game away or risk losing it. We began our rallying cry of “We need 5”..runs that is. Why five? No lead is safe with these teams, especially in extra innings.

The Braves jumped on the new pitcher with smart base running and plate discipline to put five on the board as Tate Pugh sacrificed his last a bat to cause a double play with the bases loaded so he could take the mound for the bottom of the 10th and leave enough time to finish the game before our curfew.

When Tate took the mound, he knew we had only 10 minutes left to complete the game else we would pick it up another day and revert back to the score at the end of nine. The first two hitters didn’t comply as the first hit a deep ball for a double and then came around to score. It’s 8-4 and time is running out. Tate and the defense buckled down for one more push and got three quick outs to end the affair. Tate’s line 10 IP, 6 hits, 11 SO, 0 Walks and 2 ER. He is our unanimous MVP!