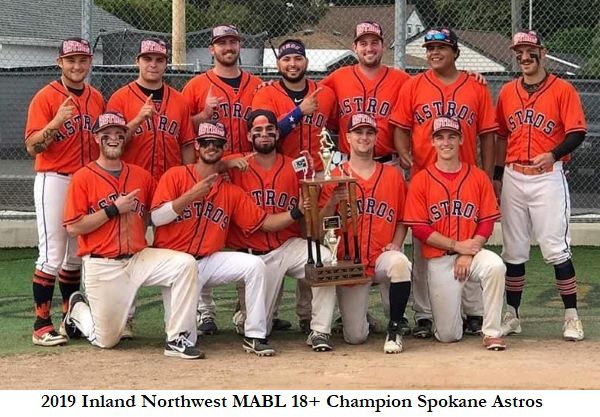 Tucked away in the upper left-hand corner of the United States we have a small city called Spokane, home of the Inland Northwest MABL. In my opinion, we play a pretty good brand of baseball that is extremely competitive. That opinion was proved out on the afternoon of September 8th, 2019. We had weather delays in two of the three weekends we played our playoffs, including the scheduled weekend of the championship game. We waited three weeks in between the winners bracket final and championship weekend. We play a double elimination tournament with a single nine inning game as our championship. All but three of the games played in our tournament were decided by three runs or less.

Our league is very tight knit. In January we played in the MSBL Desert Classic Tournament in Palm Springs and took second, outscoring teams 35-4 in pool play. Most of us play together in tournaments like that, including the 2019 MSBL World Series 25+ division. Almost every team in our league will had at least one player on the team with many teams sending multiple guys. We all know each other well, our strengths and weaknesses, our mannerisms and tempers, etc. This is important when realizing how close these games really were. Every playoff game came down to the wire.

The Phillies have won our league five years in a row. I have managed and played on teams in this league with anywhere from an eighth-place finish to a second-place finish, but I had never won it all. I love winning. But I seem to hate the heartbreak of losing more than I love winning. When we play in our last championship weekend, the losers bracket final plays a game in the morning while the winner of the winner’s bracket receives a bye into the finals. The Phillies and the Dodgers played a 10-inning thriller with a large comeback, clutch hits, and even a bench clearing situation. I mean it had everything. The Phillies ended up prevailing, setting up a rematch of the winners bracket final, Phillies versus Astros.

It was the most incredible game I’ve ever been a part of. The Phillies had a tough time defensively in the first inning, coming off of that 10-inning thriller just 30 minutes before. But it let us get out to a 4-0 lead. Fast forward to the sixth. It was 5-2 Astros in the top of the sixth and we just fell apart. A couple of close calls, a couple of errors, a walk or two and it’s suddenly 10-5, Phillies. Our 1-2 hitters popped out and grounded out to start the seventh but then our 3 hitter hit a monster solo homer and we’re back in it, 10-6 Phillies. We got one more in the eighth and going into the bottom of the ninth it stood at 10-7 Phillies. This is where it gets crazy.

Our 7 hitter singled, our 8 hitter singled, the 9 hitter bunted them over and our 10 hitter singled and moved to second on the throw. It’s now 10-8. Our leadoff guy had struggled the entire game, but our team never quits. We had two walk-offs already on the year, and one was his. He singled over the shortstop’s head and two runs scored. We’re knotted at 10 apiece and I came up to the plate.

The first pitch was a wild pitch but I held the runner at third, while our guy on first moved up to second. There is one out, and they need the double play so they intentionally walk me. Our 3 hitter

came up, and they pitched him carefully since he had homered earlier. Unfortunately, he struck out. Our 4 hitter swung and misses at the first pitch. The next pitch was a ball. It’s now 1-1 with the bases loaded. The Phillies need a double play to get out of it.

He then hit a ground ball to the right side. I don’t know if I’ve ever run that fast, but all I know is that the ball never got to second. I heard my teammates yelling. We won. We walked off in the championship game. We beat the 5-time defending champions! I have been in the league five years and never seen somebody other than the Phillies win. Somebody finally did it, and it was the 2019 Spokane Astros.

Here is a ‘Shout out’ to every player on our team. We had more “complete team wins” than I have ever seen on a “Sunday league” team. It was a world class operation. For many of our guys, it was their first and last championship. About half of our team is retiring. We all have jobs and families and most of us have kids and for many of us it was a beautiful thing to feel that incredibly pure, child-like joy again.