The Arrows and Hurricanes are the two oldest franchises in the Indiana Baseball League and it naturally follows that it’s the longest running rivalry. Prior to the 2019 Championship, the Arrows had made it to the final in eight seasons, winning it five times. The Hurricanes had been there an amazing eight seasons in a row, 11 times total, with four championships. The 2019 final marked the sixth time these two teams have faced off for the championship, with the Arrows having a 3-2 edge.

The Arrows went into the final week of the regular season tied for first place with the War Eagles. After losing the first game of a doubleheader to the War Eagles, they came back in the second game with a 9-2 victory finishing in a tie for first place. The tie was broken by virtue of the Arrows outscoring the war Eagles by 2 runs, the narrowest margin in league history.

The Arrows advanced by besting the Chiefs in the opening round 13-1. The game was much closer than the score indicates, with the score tied going into the bottom of the sixth. Next came the marathon semi final against the Rays, a game that lasted 14 innings and took a week to play. The Rays scored one run in the top of the first and the Arrows tied it in the third. Four hours later the game was suspended after 13 innings due to a torrential downpour. Fast forward to the following Sunday, continuing the game, the Arrows pushed across a run in the 14th to seal the win and set up the championship scheduled for later the same day.

The Arrows gave the ball to Luke Buehler who came into the game with a 3-0 record and a skimpy 0.95 ERA. Luke was also the starting pitcher in the semi final and had scored the winning run in that game after drawing a one out walk and stealing second before scoring on a single of the bat of Nito Luna. The Hurricanes countered with Hayden Cleveland who was 4-1 with a 1.09 ERA in the regular season and the winning pitcher in the two previous playoff games.

The Arrows defense, that had committed only two errors in the previous five games, failed early allowing three unearned runs in the first three innings putting themselves in an early hole. But when these two teams get together in the playoffs, it’s never over until the final out. Three of their previous five meetings in the championship were decided in the last at bat.

The comeback for the Arrows started in the fourth when 18+ MVP A.J. Ernst delivered a big hit scoring Luke Kluemper and Ty Foster. When Ryan Blinn followed with a single, putting runners at first and third, it looked like the Arrows were on the verge of a big inning. But Cleveland reached down for something extra and retired the next three batters with two strikeouts and an easy fly ball.

The Arrows scored again in the fifth to tie it up. AJ Taylor started it with a single, Trey Douglass followed with a walk and Nito Luna moved them into scoring position with a well-placed sac bunt. When Foster ripped a ground ball to second base it looked like a certain double play, but it reached the outfield on the Hurricanes only error of the game allowing Taylor to score. A perfect throw from right field cut down Douglass trying to score from second. 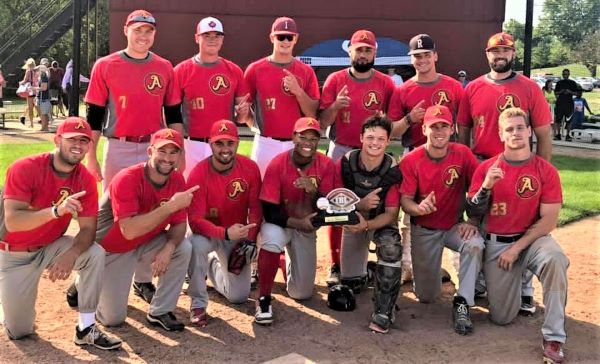 The Hurricanes took the lead back in the sixth. Cameron Clark drew the first walk of the game by Buehler with one out. Deaun Williams followed with a single and with two out Sam Maxwell delivered another single to put the Canes up by one. When Buehler gave up his second walk of the inning loading the bases and bringing up Kyle Anderson who was 2 for 2 against him, the Arrows went to the bullpen and Aaron Leming who had earned the win in the semi final game with seven innings of scoreless relief. Leming used three 90 mph fastballs to end the threat.

The seventh inning started like the fifth with Taylor and Douglass reaching on a walk and a single, and Luna dropping down another perfect sac bunt. Taylor scored on an infield out by Kluemper and after an intentional walk to home run threat Foster, Ernst came through with his second hit of the day driving in Douglass for the eventual winning run.

Leming threw a scoreless seventh and eighth with two more K’s and then turned it over to former college teammate Seth Powers, who got the final three outs on only nine pitches. With the semi final game, this gave him his second win of the day.

In the regular season, the Arrows led the league with a team average of .374, also leading in runs, extra base hits and fewest strikeouts. The pitching of Buehler, Leming, Blinn and Powers accounted for a record of 10-1 with 82 K’s and only 37 hits.

Adversaries during the 2019 college season, Buehler for Rose-Hulman and Leming for Franklin College, the two of them combined for a remarkable playoff run. Buehler with a complete game win, a total of 19 2/3 innings allowing two earned runs with 25 strikeouts and only four walks. Leming threw 9 1/3 innings of scoreless relief, striking out eight and walking only two.

Only hours before the 2011 Championship game, Arrows catcher Brad Everett lost his life in a car accident. He is still listed on the roster. Their 2011, 2013 and 2014 championships were dedicated to Brad. After a four-year absence, they are proud to once again honor his memory.