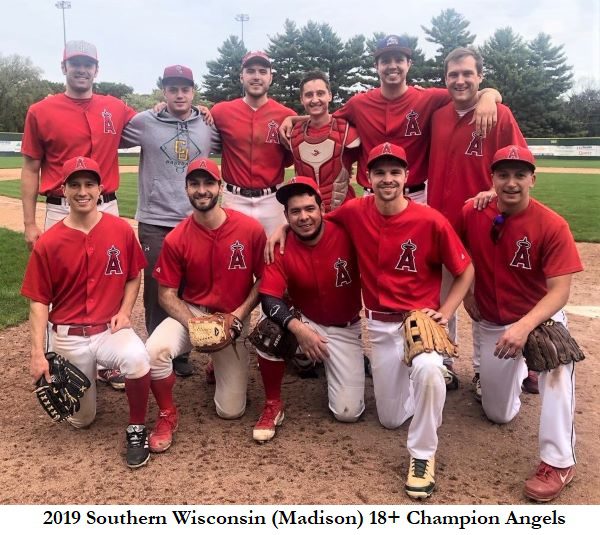 ‘Shields and Carrington Provide the Spark’

The Angels capped off their impressive season in the Madison (Southern Wisconsin) 18+ MABL with their first ever championship! It had been a long time coming for the Angels and some of their veteran players, including Manager/shortstop Douglas Wolf, second basemen Brad Simon, catcher Gary Nevala and infielder Jeremy Johanski, who remember the beginning years of the Angels when they were an expansion team in 2012 struggling to win any games early on.

Recent years have seen the Angels continue to climb the ranks and this year they took the #1 seed during the regular season. The playoffs were highlighted with great defense and amazing pitching for the Angels, only allowing one run in their three playoff games. With their team ERA leader, Will Coleman, injured right before the championship game, it was on the shoulders of their other ace, Jake Shields, to provide a great outing against the very tough A’s.

After struggling slightly early and falling behind 1-0, Shields did just that. He settled down and excelled to pitch a complete game, allowing just that one run. The big hit of the day came from cleanup hitter Jimmy Carrington, who broke open a 1-1 tie with a 3-run homer over the left field fence, taking the momentum of the game the Angels way. After that, it was shutdown pitching, solid defense, and a few more timely hits that ended in a 6-1 victory and a first championship celebration for the Angels!