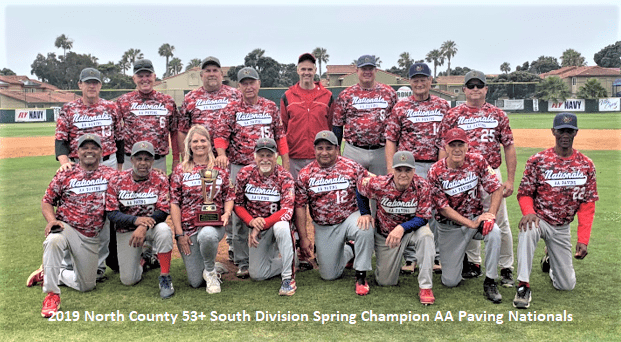 The championship game was between us, the AA PAVING NATIONALS and the S.D. PIRATES in the MSBL NORTH COUNTY (San Diego) 53+ South division. Our two teams have played each other for the championship for the last 3 seasons. All have been very good games. The first season we lost by one run with the tying run on third and the winning run on second and couldn’t convert. The second season (last season) we lost by five runs.

At the conclusion of this season we both had the same won/loss records, however the PIRATES had defeated us twice in the regular season with us defeating them only once as one of our scheduled games against each other was rained out. This season was both of our team’s final game in the league and we came out on top 9 to 5.

Our MVP of the game was our pitcher Doug Buetel, who pitched 8 1/3 great innings. He pitched out of two bases loaded situations, one in the fifth inning and one in the ninth inning. Tommy Lopez hit a double to score the game tying run in the fifth inning. Dennis Dusso, Marshall Gibbs, Joe Parra and Dave Tenney all came up big with RBI’s in the top of the ninth inning to put us ahead by four runs.

Earl Andrewson pitched the last 2/3 of the ninth inning to seal our victory. Earl came in the game with one out and two men on base. He gave up a double and one earned run and walked the next batter. The next batter got on base on an E-6 which scored an unearned run. Then Earl settled down and got the last two batters out on ground balls to end the game and secure our season as league champions. A GREAT WAY TO GO OUT!!