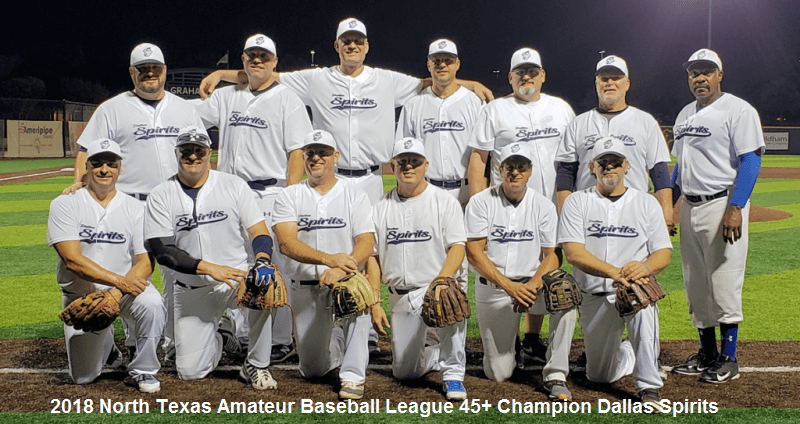 August 27, 2018–Plano, TX…We see games played and even championships that come and go. Every sport, every season provides a new story and a new victor. On a Monday night in August one of those games revealed itself under the lights at Graham Field. 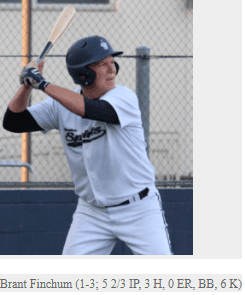 Based on season results one may believe that the Spirits squad held favor in the big game, but history between the two ball clubs tells a different story. The Reds pitcher, Dan Sosa, has seen success against the ‘ghosts’ on a number of occasions. However, Sosa’s opposing pitchers, Brant Finchum and Sean House had slightly better evenings, respectively.

Monday night’s 45+ Masters League Championship was no exception, as Sosa took on Finchum in what proved to be a pitcher’s duel from the get go. Finchum and Sosa both escaped the first inning without damage.

With two outs in the second, Stacy Scott drew a controversial walk for the Reds in what appeared to be a rather tight strike zone, but Finchum didn’t let it bother him. Scott swiped second to give the Reds a runner in scoring position, but Finchum promptly struck out Chris Duty to end the threat. Sosa responded by setting down the Spirits in order on only six pitches.

In the top half of the third, Finchum enticed three ground outs on seven pitches and another shutout inning. The Spirits offense returned in the bottom half of the third, while mustering a few base runners, but once again came up scoreless. With two outs Chris Lewis finally broke Sosa’s spell with a soft line drive for a single and Jack Nash made things interesting by wearing one of Sosa’s pitches on the foot. The rally died quickly, however, as Sosa got Mark Leemaster to ground out, leaving the game scoreless after three.

In the top of the fourth Finchum sent T.K. Hayes back to the dugout on called strikes then Rob Medel reached on 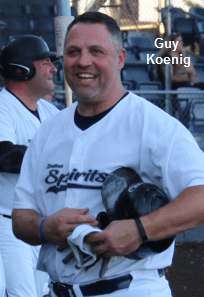 a single. Marc Fagon flew out and then Medel stole second to give the Reds an ounce of hope. Finchum got Sosa to fly out to end the Reds half of the inning. Sipila reached on a one-out single in the bottom half of the fourth for the Spirits, but Sosa found the right combination of pitches to stall the Spirits offense. Scoreless after four.

After getting Baker for the first out in the fifth, the Spirits defense was put on notice after the Reds’ Scott found a gap in left-center field to record a double. With a runner in scoring position and one out, Duty returned to the plate looking to add a big swing to make the game more interesting. What he found was a 12-6 curveball from Finchum for a called strike three. James Roberts grounded out and the pitcher’s duel remained intact.

Koenig returned to the plate for the Spirits in the bottom half of the fifth, belting a line drive over the head of the Reds left fielder to lead off the inning with a double. Lee returned to the plate and squared to bunt, but then appeared to change his mind on the next pitch and delivered a shot to the warning track but right to the Reds left fielder.

“I probably should have laid one down,” commented Lee after he was questioned on his decision. “I really felt it was a great opportunity to move Guy over. We’d have had a runner in a position to tag and in a close game like this, perhaps that’s the difference.” The offense sputtered a bit after Koenig’s big hit and Sosa was able to get out of the inning once again without damage. 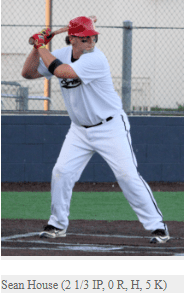 The game moved into the top half of the sixth in this seven inning contest as Sammy Vives battled Finchum and was able to reach safely on a single. Finchum was able to strike out Bobby Michaelides, but Hayes dropped a perfect bunt to sacrifice himself and push Vives to second. With a runner in scoring position and two down, the Spirits brought in Sean House in relief to put a stop to the inning. House appeared to have gotten the job done as Medel slapped a line drive toward right that Nash gave chase to. Nash looked in control, but the ball hit the heal of his glove and Medel reached safely and Vives made his way to third. The Reds’ Fagan became the hero after he singled to score Vives and the Reds had a 1 to 0 lead and the momentum. House got Sosa on a ground out to end the inning, but the momentum appeared to be with the Reds.

“We remained confident going up to bat down a run,” commented Spirits manager Sipila after the game. “We opened the season with a last inning comeback win against the Hurricanes and the very next week we did it against these same Reds. Playing under pressure is nothing new to these guys and I was confident in every one of them that we could still get it done.”

The Spirits offense did make things dramatic moving into the bottom of the sixth with Nash reaching on a one-out error to give the ghosts a base runner. Nash was later retired at second that allowed Leemaster to reach on a fielder’s choice. Finchum followed up with a single to give the Spirits a runner in scoring position, but the opportunity was slammed shut after Sosa made an incredible play to leap at a ground ball delivered from House up the middle, ending the threat. Reds 1, Spirits 0 after six. 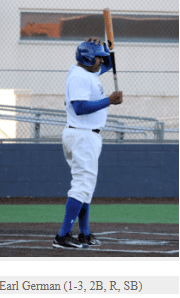 them down, 1-2-3. Next up was the fateful bottom of the seventh, the Spirits final shot.

Sipila led off but grounded out for out number one. Bilgere stepped in with a hot bat but flew out to give the Reds their second out. With one out remaining, Koenig took to the plate and watched a called strike followed by a ball. What happened next burned memories into Spirits heads that will likely last a lifetime. Koenig roped the next pitch to center field while the Reds center fielder Baker appeared to have a solid jump on the ball. As Koenig raced to first for a sure single, Baker lunged toward the ball in an effort to catch it and the ball blew past him and headed for the center field wall. From here, it was quite literally a foot race. As Baker gathered himself and turned, Koenig completed a race of his own making it all the way around for an inconceivable, two-out, bottom of the seventh inning inside-the-park home run to tie the game.

“I was just looking for a pitch to hit the other way since he (Sosa) throws me a lot of off speed pitches. I was hoping to find a gap,” he commented. “After he wasted a fastball, I was looking for a curve ball away and that’s what he threw me. I saw that the center fielder (Baker) was running up to make a play, but I also realized the ball was tailing hard and away from him. After I saw him diving and missing, I knew I had to get to third. I was stunned to see Earl (German, who was coaching third base) waiving me home. I just kept my head down and kept going. I was exhausted, but I stumbled to the plate and dropped, out of gas.” 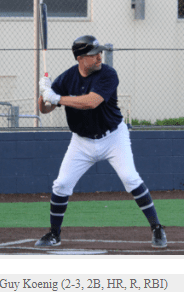 Koenig’s unbelievable trip around the bases was good enough to tie the game and at least possibly force extra innings. With the momentum now shifted toward the Spirits, Lee entered the box and was able to produce an infield single. The Spirits were still in business. The count went 1-1 to McPherson when the Reds catcher mishandled a pitch and Lee was safe at second. McPherson battled Sosa to a full count but was erased on a delayed called third strike to end the inning. With momentum on their side the Spirits took the field for extra frames.

With momentum on his side, House wasted no time in the top of the eighth with the Reds hitters as he struck out the side. The Spirits returned to bat while celebrating new life. German started things by driving the ball hard down the right field line for a lead-off double. The Reds then intentionally walked Nash to create a force. A few pitches into the battle with Leemaster, German took off for third. With a huge lead and an incredible jump, he stole it easily as the Reds’ Duty made an incredible diving play at third to catch the throw and to save a run. Nash was able to move to second on the play and Sosa went back to work on Leemaster. Leemaster, a former Naval Commander, calmly worked the count to 3-2. Sosa delivered the payoff and the switch-hitting utility player slapped a medium line drive into a drawn infield and outfield good for the walk-off single and the Spirits championship over the Reds, 2 to 1!

“What a great game!” stated (manager) Sipila after his team finished celebrating. “We came full circle tonight. We 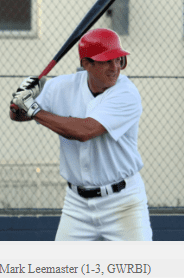 started the season with come-from-behind wins and tonight was that same feeling. First and foremost, I want to take my hat off to the Caddo Reds. What a great effort from them tonight. Bill Macey and his group of players should be proud of their effort. Sosa was a witch on the bump tonight for 6 and 2/3 innings.”

Sipila continued, “Watching House come in and strike out the side was huge for us in the eighth. Watching Earl hit that double and break the unwritten rule to never take a chance at stealing third with nobody out? That was crazy! The drama made this game a lot of fun. And finally, Leemaster’s hit. I think every player dreams of having that opportunity and it couldn’t have happened to a better guy. He’s such a patient player and hitter. It was an awesome moment to say the least.”

“And we have to give a shout out to Big John (Holmquist),” Spila pointed out. “He didn’t factor in tonight, but a 7-0 record and an ERA just over 2.00 helped pave the way to this opportunity. He had a heck of a season. Lastly, I’d like to thank God and also share a special thank you to all of our loyal fans and our ladies that all support us while we play the game we love. Michelle Sipila, Angie Biggs, Aimee Peketz, Cybil

Taylor, Lily Nash and the gang from the Hackney family, we love and appreciate you guys so much. Thank you!”

The victory gives Sipila and the Spirits 45+ squad their first title as the team finishes the season with a record of 20-1, with the only blemish being to this very same Reds team.