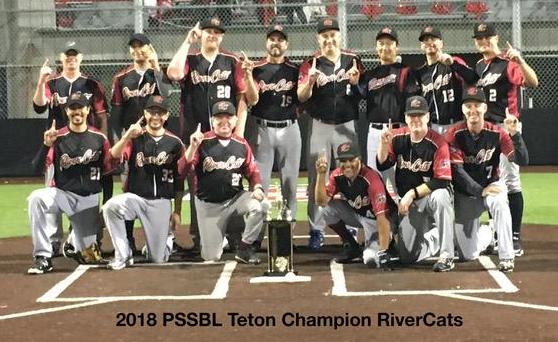 The RiverCats won the 2018 PSSBL Teton 35+ Championship 8-4 in the second game of a double header to win the championship against the Teton Barons.

With a regular season record of 16-1-1 and unbeaten in the playoffs going into the final game, the Barons handed the RiverCats their second loss of the season (4-3) to force a game two and winner take all final game to determine who would be the Champs in 2018.

The Rivercats jumped out to an early 4-0 lead in game two and never looked back. As General Manager I was very happy to have managed the team to an 8-4 win and secure the team’s second Championship in five years with solid pitching and a dominant offense. We have good chemistry and we like playing together. We are a family. Also, we never give up and we all want to have fun and win. It should be noted that our two RiverCats losses were exciting 2-out, 1-run games settled in the ninth inning!

The RiverCats pitching led the division in strikeouts with 187 by hard throwing Team MVP Alan Webb, Walt Simpson and Toshi Niwa. The RiverCats proved to be hard to beat, leading the Teton division in hitting with a team batting average of .376 supported by team batting leaders Walt Simpson, Alan Webb, Travis Gonzalez, Toshi Niwa, Andy Tweed and I. We look forward to competing for the trophy in 2019!