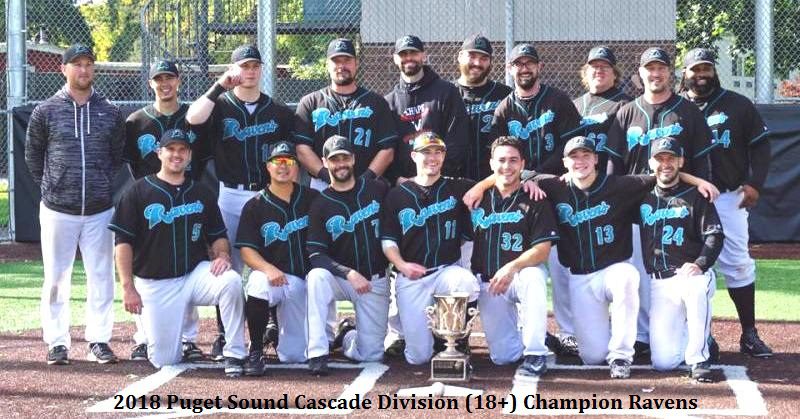 ‘Ravens Go ‘Back to Back’ in Walk-off Fashion’

The Reds finished the regular season a half game up on the Ravens for first place and won the head to head series 2-1. The Reds, managed by Brandon Williams, featured one of the league’s best offenses complimented by a pair of ace lefty starters in Spencer Seabourne and Alex Hatch. The Ravens found their success with a rotation of four solid starting pitchers, a dominant closer, a stingy defense, and an opportunistic offense. The top two seeds seemed destined to square off for one or more playoff games deep in the double elimination bracket.

In the first round, the Ravens faced off against the sixth seeded Dodgers, a team that had just won a play-in game 7-0 a couple days prior. The Dodgers played the Ravens tough all year and the playoff opener was no different. The Ravens handed the ball to long time ace and PSSBL hall of famer Jeremy Thornton. Thornton went seven strong innings and gave up only one run on six hits.

In the fourth inning, down 1-0, Ravens catcher Michael Sherwin jump-started the offense with a leadoff triple, Ben Ruff walked and stole second, and they were both driven home by Derryck Christensen. In the fifth inning Paul Fisher singled and was promptly doubled home by Andrew Barry. In the sixth Ruff hit a leadoff double and was again driven in by Christensen. With a 4-1 lead, Thornton handed the ball to closer Ben Ruff who retired the remaining batters in order. The Reds cruised to a 9-1 victory in their playoff opener.

In the second round the Ravens faced the Tigers, who finished as the third seed. The Tigers featured a fearsome offensive line up, but Jim Radovich got the start for the Ravens and was up to the task. Delivering his usual solid workman like start, Radovich was in complete control for the first five innings allowing only three hits. On the other side, the Ravens offense exploded with an 11 run second inning and continued to pour it on. Ben Ruff and DJ Penick led the way with three hits apiece. By the time the Tigers started to get to Radovich in the sixth the Ravens lead had already ballooned to 17-0. However, the Tigers did not go quietly. Late in the game their offense got going, but the early deficit proved much to overcome and the Ravens won 18-7. The Reds again cruised in their second round matchup winning 14-0 and setting up a winner’s bracket matchup with the Ravens. 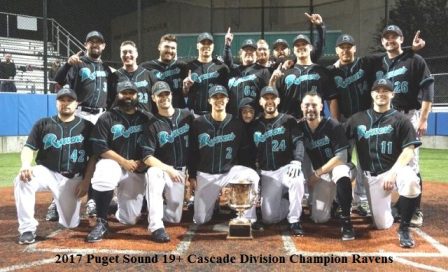 bracket final for a trip to the championship. The Reds gave the ball to Alex Hatch, who pitched extremely well. However, the night belonged to Ravens starter Todd Jeffress. Jeffress delivered his most brilliant performance of the season in the biggest spot possible.

After allowing the first batter of the game to score on a HBP and two subsequent singles, Jeffress proceeded to shut the Reds out for the remainder of the contest. In his complete game effort he allowed just the one run on only five hits and struck out 11. The Ravens tied the game 1-1 in the fourth on back-to-back-to-back singles by Ben Ruff, DJ Penick and Deryck Christensen. Then in the eighth inning with the score still tied 1-1, Michael Sherwin and Christensen singled. With men on first and third and two outs, Brian Whetzel was asked to pinch hit. Whetzel delivered a clutch RBI single and the Ravens took the lead 2-1. Blake Fisher and Justin Sherwin followed up with their own RBI singles pushing the lead to 4-1. That was all Jeffress would need as he seemed to get stronger as the game progressed. He struck out three of the last six batters of the game to send the Ravens to the championship.

The Reds won their next game 11-4 setting up a rematch with the Ravens in the Championship game at Russell Road Park.

For the Championship game it was a clash of styles on the hill. The Ravens handed the ball to crafty right hander John Trupin. The Reds gave the start to their long time hard throwing lefty ace Spencer Seabourne. Again, the Reds struck early with a leadoff double and a run in the first inning. That was followed by a triple and another run in the second inning. After falling behind 2-0, Trupin settled into the efficient groove he normally finds with his excellent control.

From the third inning through the eighth inning Trupin faced only two batters over the minimum as he induced ground outs and pop-ups galore. On offense, the Ravens were struggling to deal with Seabourne. The Ravens were no-hit through five innings and managed only two baserunners. However, in the sixth Andrew Barry was hit by a pitch with one out and then Michael Sherwin clubbed an RBI triple to make the score 2-1 Reds. In the seventh Blake Fisher was hit by a pitch to lead off the inning and Matt Kruse singled behind him. The runners were moved over to second and third by Paul Fisher, which set the stage for Andrew Barry, who came through with a huge 2RBI single to give the Ravens a 3-2 lead.

In the ninth, with the 3-2 lead still intact, Trupin gave way to Ravens closer Ben Ruff. Even facing the hard throwing Ruff, the Reds were determined to force a second and decisive championship game and tied the game 3-3 in the top of the ninth. However, in the bottom of the ninth Matt Kruse led off for the Ravens with a single, advanced to second on a wild pitch, and then Paul Fisher walked. After back to back pop outs, Ben Ruff singled to load the bases. DJ Penick stepped to the plate with two outs, bottom nine, a 3-3 tie, bases loaded, and a championship on the line…and he delivered a walk off single through the 3-4 hole to give the Ravens the 4-3 victory and back to back Cascade championships.