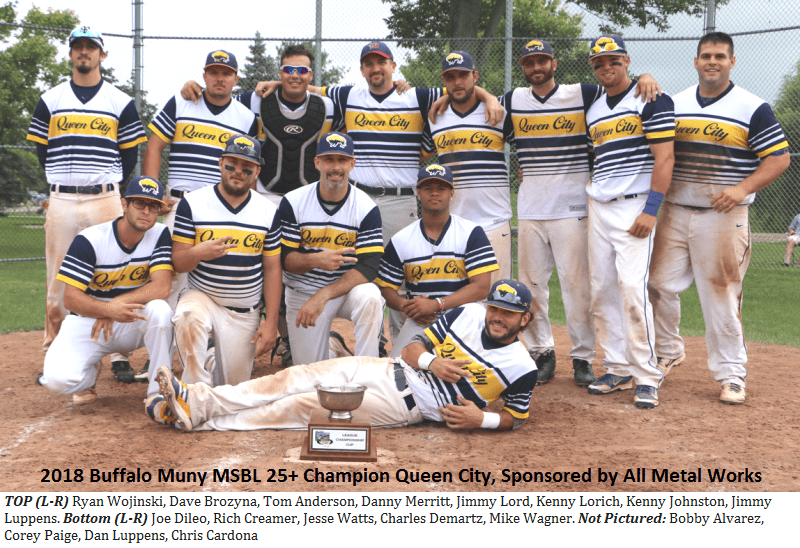 In the 2018 summer season of the Buffalo Muny MSBL, Queen City, sponsored by ALL METAL WORKS, claimed the Championship in the 25+ division by successfully defending their 2017 title and sweeping Erie Buffalo in a best of three series. Queen City is a new team to the league with many veteran players combined with young talent. Queen City has won the title its first two years in the league and looks to 3-peat in the upcoming season. 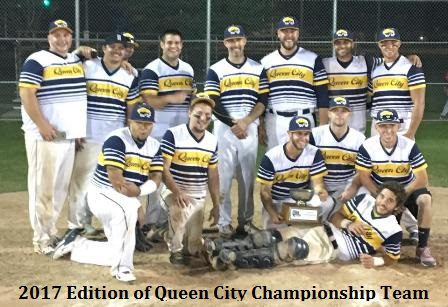 Compiling a 16-6 regular season record and a 6-0 playoff record (12-1 past two seasons) Queen City was able to end the season on a 11 game win streak with dominant pitching, stellar defense and timely/clutch hitting. Queen City’s powerhouse pitching staff was able to dominate in the playoffs with Joe Dileo, Dave Brozyna and Mike Wagner all getting wins. Joe Dileo’s MVP pitching performance in the playoffs will be talked about for years to come, taking the ball in four playoff games and proving to be a dominant force.

Queen City was able to finish the season with a team batting average of .325 with Kenny Johnston, Jimmy Luppens, Jesse Watts, Ryan Wojinski, Chris Cardona, Mike Wagner and Bobby Alvarez all having an all-star season. Tom Anderson, Rich Creamer, Kenny Lorich and Jimmy Lord all came in clutch with key hits during the playoffs. This season’s success was a combination of hard work and team chemistry. Every player on the team was able to contribute to this memorable season.