The OC Dodgers have been in the SoCAL MSBL since 1994 and in its current form, we’ve been together for about 11 years now. In that time, we’ve been to the finals six times and the semi-finals three times. This is our fifth Championship in that time frame and our 12th overall since 1994, but this year was special. We started off the season with the goal of reaching the Championship, but with several new players added to our roster we weren’t sure how the team would round out.

We faced off for a best 2 of 3 Championship with the Dodgers winning the first game 11-1 and the Indians rallying to win the second game 3-2. That set up a one game Championship at the OC Great Park and it was a battle from the beginning. Both teams played well and we were tied 4-4 into the fifth inning, when it appeared the Indians were going to break open the game.

They led off the inning with a base hit and the next batter bunted him over. With one out, the Indians got another base hit driving in the run. Their next batter got a base hit to right, but I was able to pick up the ball on one hop and fire it to home plate. The ball was cut off by starting pitcher Robb Munson who completed a perfect relay to get the second out at the plate.

With one run in, two out and two runners on base, the Indians next batter got another base hit to right field, or so it 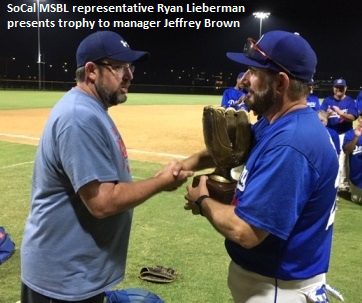 seemed. I was once again fortunate enough to pick up the ball on one hop and fire it to first base, beating the runner for the final out of the inning while keeping any additional runs from scoring. From that point on, the Dodgers broke the game open, scoring runs in the fifth, sixth, two runs in the seventh and four runs in the eighth.

Dodgers starting pitcher Robb Munson shut down the Indians for the last three innings of the game, giving up only three hits and no runs, for a complete game victory. Dodgers Mark Owen, Brett Young, Juan Marante, Tony Ablett, Doug Thigpen, Ron Benedict, Paul Contreras and Ralph Cedillo had multiple hits in the game as the Dodger offense produced 11 runs in route to the Championship!

All in all, it was one of the best Championship series we’ve ever been involved in. The Indians were a tough team and they kept up with us every step of the way until the end. The Indians are a great group of guys and phenomenal players who pushed us to the limit. Kudos to the OC Indians on a fantastic year!