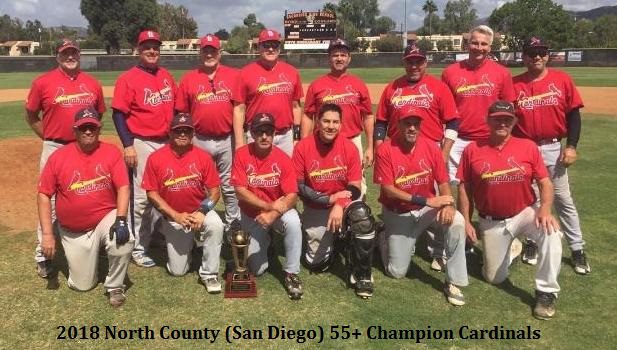 Before the 2018 season began, North County league president Doug Johnson approached Jim Tapper and asked if he would put together a 55+ team together for that division. Tapper called around and I was fortunate enough to be one of his calls. Organizing a team is hard enough while maintaining a healthy team at our age is even harder. We have a great nucleus of guys who love the game.

We started the season slowly with a loss but with ten guys batting over .350 and a strong pitching core we quickly picked up steam, winning out the rest of the season. Fortunately our success continued into the rest of the season. Tapper earned the championship game MVP with hits in crucial situations that generated RBI’s and eventually an 8-5 win.

Joe Flores and Paul Storck both pitched well striking out a combined eight batters while holding the Yankees to five runs. Thanks go out to the Yankees for their great sportsmanship, competition and fun. Finally, thanks to Doug Johnson for continually putting together a great league for all ages.