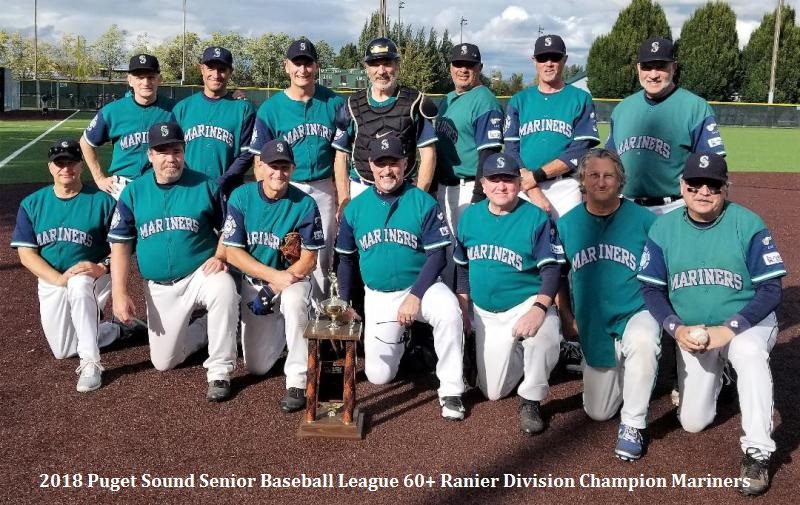 The 2018 season marked the debut of a new 60 and over Rainier Division in the Puget Sound Senior Baseball League. The league, which celebrated its 30th year, serves the greater Seattle-Tacoma region.

The Rainier Division championship game featured the teams who finished one-two during the regular season, the Mariners and Tugs. Earlier in the double elimination bracket, the Mariners eked out a 2-0 victory over the Tugs – a game in which pitching and defense was highlighted. However, the bats took over in the deciding contest with the two teams knocking out a combined 29 hits.

The Mariners took an early 6-1 lead, but the Tugs battled back to narrow the margin to a single run at 6-5 in the top of the sixth inning. The M’s pulled away with 3-run innings in the sixth and seventh frames while holding the Tugs scoreless for the remainder of the game.

The Mariners claimed the first-ever PSSBL Rainier Division title with a 12-5 victory.

Rocky Nordness, who had thrown a 4-hit, 2-0 shutout against the Tugs earlier in the playoffs, was the winning pitcher in the championship game. He scattered 12 hits while giving up five runs. Nordness finished the season 8-0 with a division-leading 1.08 ERA.

All but one of the Mariners in the starting lineup had a base hit as the team pounded out 17 safeties. Rich Bonny went 3-4 while Nordness, David Caffey, Wayne Ottum, Jay Hyma and Steve Packer had two hits apiece. Caffey hit .556 and Bonny batted .500 during the M’s playoff run.

The Tugs were led by Greg Thompson, who went a perfect 3-3 at the plate. David Mathews, Bill Williams and Dave Reynolds contributed two hits each. Reynolds, who was inducted into the PSSBL Hall of Fame earlier in the season, took the loss on the mound for the Tugs.