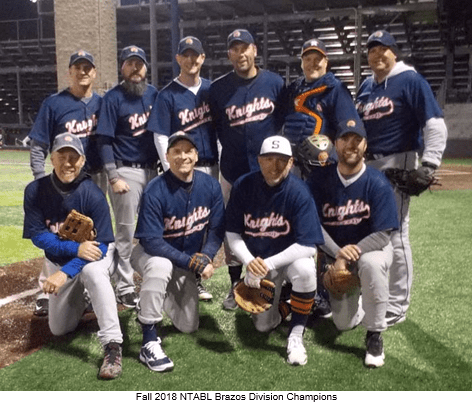 November 14, 2018…The crisp fall air felt like a frosty blanket, setting the unusual stage for the North Texas Amateur Baseball League Brazos Division Fall Championship game. Game time temperature read 34 degrees. Tonight’s contest featured the two time defending champion Dallas Spirits against the upstart Knights. On paper this was a mismatch. Baseball is for the boys of summer, but on this night both teams were bundled up tighter that the Sunday morning newspaper. Knights starting catcher, Greg “Cash Money” Pennywell, set the tone during pre-game warm ups stating, “I’m envisioning somebody catching one a little thin and littering fingers all over the infield.” 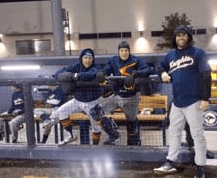 The visiting Knights faced the hard throwing Spirits ace, Jason Bottenfield. Their starter got a swinging third strike to record the first out of the ball game then I followed with an infield single. With only one out, Haley “The Comet” Hougen moved me to second with a single to right center. Matt “The Sheriff” Lawley’s fielder’s choice ground ball forced Hougen at second, putting runners at the corners with two outs. A wild pitch gave the Knights an early lead, as I scored the first run of the contest. Greg Pennywell drew a base on balls and Michael “Deuce” Kubik reached on a fielding error to load the bases. Jesus “El Gato Grande” Marquez worked the count full before recording an outstanding ten pitch base on balls, scoring run number two. David “Walking Dead” Poole then rifled an RBI single to left field stretching the margin to 3-0 Knights. The Blue & Orange couldn’t have envisioned a better start to the battle.

The Knights sent starting pitcher Keaton “Shogun” Hougen to the top of the mountain, as he was equal to the task. Hougen struck out Brant Finchum at the top of the order and got Bottenfield to fly out to left field. Kirk Sipila flared a single into shallow right field and the Spirits fabulous cleanup hitter, Travis “Adonis” Hitzeman, smashed a double down the left field line. Brother Haley Hougen hustled into the corner and threw a laser to Marquez at third base, preventing Sipila from advancing home. A wild pitch later in the inning put a punctuation mark on the importance of that moment, when Pennywell retrieved the baseball and placed a throw right on top of the dish. “Shogun” narrowly beat Sipila to the plate and deftly applied the slap tag, preserving the shutout after one complete inning.

The Knights hit the ground running in the top of the second, with consecutive singles from Keaton Hougen and

Greg “Tomahawk” Haddon. I then followed with a hot shot to the second baseman, but the fielder muffed the chance, loading the bases with nobody out. Haley Hougen followed with a sky fly ball down the right field line, headed for no man’s land in shallow right, but was ruled an infield fly for out number one. Brother Keaton was able to score from third base on the play, earning a RBI for his sibling, and the other runners advanced a base. Lawley plated Haddon, with a ground out to shortstop, and I moved to third. The aptly named “Cash Money” Pennywell gave the Knights a six run cushion, chasing home “The Poet” (Me), with a single to left field. Kubik grounded out to the second basemen, recording the third out, but the Knights had given a 6-0 advantage to their starter.

Hougen struck out Bobby Kornhauser and then gave up a single to the Spirits speedster, David “Superfly” Tipton. Hougen then struck out Eric McPherson, but Tipton stole second base during the at bat. John “Playboy” Hefner’s infield pop out ended the inning, while Hougen nestled the ball in his glove just in front of the mound.

The Knights offense continued the charge in the top of the third, when Marquez singled into shallow right field. Poole walked behind, but was forced at second on Leggett’s fielder’s choice ground ball. Poole replaced Leggett at first, as a designated runner, and stole second base, to reach scoring position. Keaton Hougen took a called third strike for the second out of the inning, and Haddon took his turn at the top of the order. “Tomahawk” punished the baseball for a two run double, and the Knights had shattered the glass ceiling for an improbable 8-0 head start.

The Spirits came to life in the bottom of the third, with consecutive singles from Jonathan Duran and Jack Nash. Hougen painted the outside corner for a called third strike on Finchum, and Bottenfield lashed a rocket to left, loading the bases with only one out. The Spirits MVP Kirk Sipila dug in at the plate but Hougen calmly flipped his harmless come-backer to Pennywell at home, who easily relayed to Lawley at first base for the inning ending 1-2-3 double play.

The Spirits made a pitching change in the top of the fourth, when Hitzeman took over for Bottenfield, as two grounders and a fielder’s choice took care of the Knights. The Spirits also came up empty in the inning thanks to a spectacular catch by right fielder “Deuce” Kubic ending in a double play at first.

The Spirits went to the pitching well once again, replacing Hitzeman in the fifth with Jonathan Duran. Poole and Leggett got consecutive one out singles for the Knights, but three ground outs in the inning left them stranded.

McPherson reached on a strikeout, wild pitch combination in the Spirits turn, but Hefner grounded into a 6-4-3 double play, clearing the bases. Duran singled to left field, but Nash ended the inning swinging.

The Knights went in order in the top of the sixth and sent their starter back to the mound for one more inning in the bottom of the frame. A called third strike brought the top of the order to the plate for the third time. Finchum and Bottenfield singled in succession, but Sipila grounded into a fielder’s choice, forcing the runner at second base as the second out. Hitzeman took his turn at the cleanup position in the order, for one last epic battle with the Knights starter. “Shogun” saved the best for last, retiring the mighty “Adonis” with a spectacular two strike curve ball. “Shogun” made judicious use of his 80 pitches, allowing nine hits with nine strikeouts and only one walk over six innings of dominant pitching. Most importantly, he did not allow a run.

Marquez singled with two outs in the top of the seventh and last inning, but the Knights were unable to advance “The Big Cat”. Haley Hougen replaced his younger brother on the mound for the final three outs of the ball game.

“The Comet” over-powered Kornhauser and Tipton with his flaming fast ball and quickly recorded two strikeouts in the final inning. McPherson lined a single into center field and Hefner blooped a dying quail into right field. Leggett raced in for a diving attempt at recording the final out, but pulled up lame with a hamstring injury. “Lone Justice” was able to keep the ball in front of him, and Hefner’s single put runners at the corners with two outs. Poole went to first base, as Lawley moved to right field. Hougen reared back and struck out Duran to end the contest, earning the Knights their first ever franchise championship.

I was thirteen days shy of my 55th birthday and have waited 28 seasons for the opportunity to lift the championship trophy over my head. “What a journey. It’s hard for me to put into words what this means to me. This is for my father, and all the sons and fathers who have played and loved this game. After all the blood, sweat, tears and memories we have made, I can’t think of a better way to celebrate this victory, surrounded by old friends, who have emptied their tanks on the field of battle, and conquered a valiant foe. All the stars lined up for us tonight. I guess it was our time.

I can’t say enough about my team. Keaton was a thoroughbred out there, and we rode our stud horse to victory. Combine that with the lock down defense we played behind him, and we become very difficult to beat. I’m so proud of this team for their effort and for this accomplishment. Hat’s off to our opponent. They are the best team we have ever played and the best team we have ever defeated. They’re a class organization and it’s always a pleasure to face them on and off the field. We’ll remember this one for the rest of our lives. My father always said son, win or lose, play like a champion. We played like champions today, and I felt his presence. It feels really good to know that my father would be proud.”