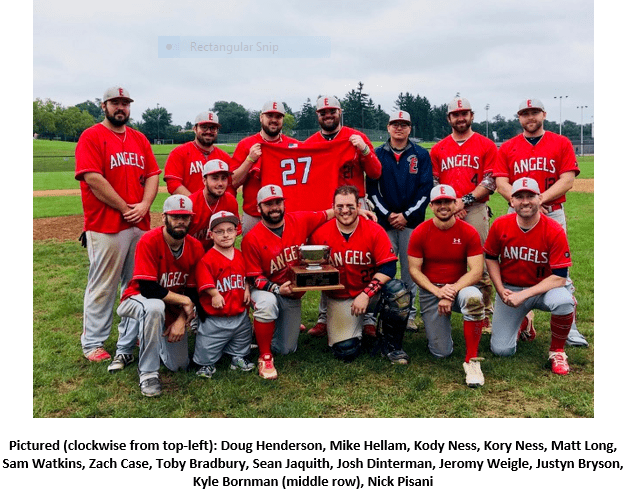 ENOLA (PA) – Even Mother Nature could not stop the Enola Angels from capturing their first PAMBL 28+ title in just their third year in the league. The season was filled with postponements, games called early and several make up dates due to a heavy dose of rain throughout the Spring and Summer months across Central Pennsylvania. Ultimately, in a season that seemingly ran forever, the Angels came out victorious over the Enola Yankees in the best-of-three championship series.

The Angels were formed by twin brothers Kody and Kory Ness. Their goal was to continue playing the game they love while honoring a friend and former teammate who passed away suddenly in May of 2014, Matthew Lingo. Once they were age eligible, they formed a team to play in the PAMBL (appropriately named the Angels) and began league play in 2016. The first year in the league was a learning experience for the brothers and their teammates, resulting in a 7-18 record and a first-round playoff exit. Year two, the team welcomed some new faces and saw drastic improvements across the board with their hitting, pitching and defense, leading to an overall record of 16-11. Unfortunately, the Angels could not overcome the eventual league champion, Mifflinburg Phillies, bowing out in game three of the best-of-three semifinal series.

Fast forward to year three, and the Angels began the 2018 season riding a wave of confidence that they could now compete with anyone in the 9-team league. Adding a few more dedicated pieces and beginning to bond more like a team of brothers, the Angels jumped out to a 9-1 start and were certain this was their year. A midseason slump resulting in a 1-4-1 record over their next six games tested the team’s mettle and proved they would have to overcome adversity in order to succeed. The Halos would finish the regular season at 12-7-1, after losing two competitive matchups in their regular season finale with the Mifflinburg Phillies.

Billed as “The Train Yard Series” because of both teams sharing a field in close proximity to the Norfolk Southern Rail Yard in Enola, the Angels and Yankees were both eager to crown themselves as kings of the town and the league in this highly anticipated matchup. Sharing a field at East Pennsboro High School offered both teams minimal travel and a home field advantage feel during the series, which did not disappoint.

Game one went to the designated road team, the Angels, by a score of 6-2. The Yankees jumped out to a 1-0 lead in the bottom of the first, but the lead did not last long as the Halos came right back with one of their own in the second and four in the third to take a commanding 5-1 lead. They would eventually go up 6-1 on an error in the top of the sixth inning. The Yankees would get the run back in the bottom of the sixth on a bases loaded walk to close the gap to 6-2, but that would be the closest they would get as Nick Pisani would retire them in order in the bottom of the seventh to finish off another complete game. Pisani would throw 113 pitches (75 for strikes) and struck out an eye-popping 13 Yankees batters on the game. He would also record two hits on the day to help himself at the plate. Joining him in the multi-hit column were Doug Henderson, Josh Dinterman and Toby Bradbury. Dinterman and Kody Ness each had two RBIs in the game.

Game two did not go the Angels way, as they were handed a convincing 9-0 loss, evening the series at one game apiece and setting up a decisive, winner-take-all game three. Chet Haifley 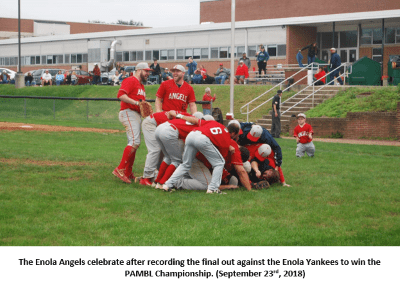 pitched a complete game gem for the Yankees, allowing five hits and one walk while striking out six. Mike Hellam and Matt Long combined to throw six innings in a losing effort for the Angels, who were done in by quiet bats and three errors in the game. Hellam had the only multi-hit game for the Angels in the loss.

The Angels had two things working to their advantage in what would be the final game of the season, win or lose, for both teams. The first advantage was that they were the home team, with final at bats if need be. Secondly, their left-handed ace, Nick Pisani, was ready and eager to help his team claim the championship. Game three of each series was unique in that it was a single 9-inning game, different from the regularly played 7-inning games that took place over the course of a doubleheader. There was more time for comebacks and more time for nervousness as to what the outcome would be.

The Halos did not wait around, this time getting to Yankees pitcher Chet Haifley early in the bottom of the first. They went up 2-0 after one on RBI singles by Josh Dinterman and Mike Hellam, and then pushed the lead to 4-0 after an error would score a run and an RBI single by Kody Ness. The cushion was more than enough for Pisani, who worked the strike zone effectively through the first six innings. He would encounter some trouble in the top of the seventh, as the Yankees’ Devin Dellinger would double home two runs to cut the Angels lead in half at 4-2. Hellam would again provide a spark for the Angels in the bottom of the seventh, hitting home Sam Watkins on a sacrifice fly to increase the lead to 5-2. Other than anxiously anticipating the conclusion, the final two innings would prove uneventful for fans as teams combined for just one hit.

In the top of the ninth, Pisani would need just ten pitches to set down the Yankees in order and lead the Enola Angels to victory, with a final score of 5-2. The icing on the cake was a strikeout of one of the Yankees more prolific hitters on just three pitches to end the game, bringing jubilation to the Angels and their fans. The lefty would finish with a line of: 9 innings, 120 pitches (88 strikes), 4 hits, 2 runs (1 ER), 1 BB and 7 K – a truly championship worthy performance. Doug Henderson, Kory Ness, Sam Watkins, Josh Dinterman, Kody Ness and Kyle Bornman all collected multiple total bases for the Angels in a 14-hit outburst.

The Enola Yankees and their manager, Perry Owen (competing in his final season), should not be discredited for having a remarkable season and finishing one game short of winning the league title. The Angels, however, were victorious on this day – finishing an up-and-down season with a superb record of 18-9-1, fighting injuries and adversity along the way to bring home the trophy. Pisani was mobbed by teammates as the dugout cleared and the Angels celebrated their first championship in team history. Playing in a highly competitive league, they proved that the new guys have what it takes to win it all too.