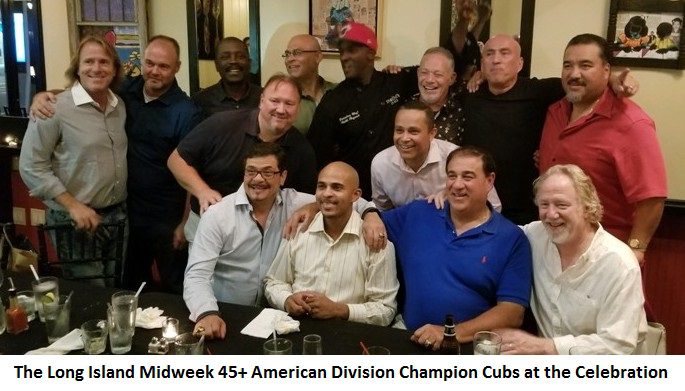 Our securing the MSBL Long Island Midweek trophy literally came down to the final at bat of the season in our championship series against the Warriors. Our Long Island Cubs came from down eight runs in our last at bat, scoring nine runs to beat the Southside Warriors 10-9 and win the 45+ American Division championship. The texture of this story may be a little different from the usual league champion stories posted on the website but I thought it would be fun to revisit the half-inning the way it played out. Here is the 13 batter sequence from our run to the title. Enjoy!

To begin, the score at the start of inning was Warriors 9, Cubs 1. Here is the blow by blow, batter by batter description of our final at bat.

Ippy Reggio started the inning with a walk. Ted Bennett pinch hit for Pete Munda and also walked. Both runners moved up on a wild pitch, sending Ippy to third and Ted to second. Jeff Hinman was added to the bottom of the order and he ALSO walked to load the bases, no outs.

Luis Perez grounded to third but Ippy was able to score. Ted tiptoed into third and Jeff moved up to second, with Luis reaching first. (Score 9-2) Rafi Maldonado promptly doubled past the shortstop while Ted, Jeff and Luis all scored. (Score 9-5) Eddie Murria was hit by a pitch, moving Rafi to second. Mike Herring followed with another double to left center, scoring both Rafi and Eddie. I’m sure the Warriors were getting just a little nervous at this point with no outs, a runner on second and holding on to a slim two run lead. (Score 9-7)

Keith Bryant struck out for the inning’s first out but then Stu Juarez singled and Keith was the courtesy runner for Stu. Mike Gonzalez followed with a bloop single to right and Mike Herring scored, moving Keith (Stu) to third with Mike advancing to second on the play. (Score 9-8)

To climax the inning, Rob “Gonzo” Gonzalez singled while Keith (Stu) scored, advancing Mike G. to third. Keith ran for Gonzo and then promptly stole second, tying the score at nine apiece. Ippy walked for the second time in the inning, thus loading the bases. Phil Baldwin was sent in to pinch hit for Ted and drew a season ending walk as Mike Gonzalez scored the winning run in walk-off fashion. CUBS WIN 10-9! INCREDIBLE!!!!