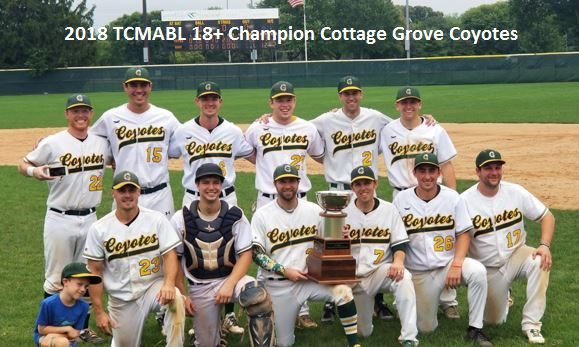 The 2018 Cottage Grove Coyotes of the Twin City MABL won their third 18+ Division championship in franchise history by defeating the St. Paul Rams 10-1. The ‘Yotes finished their up-and-down regular season in a three-way tie for second place with a 12-10 record which earned them a much needed first round bye in the playoffs. 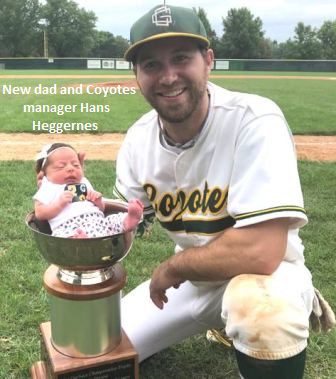 The Coyotes started the season with a rough 1-3 start, the worst in franchise history, before going on an 11-game winning streak in the middle of the season. Due to busy summer schedules, expanding families and lack of available players, the Coyotes limped into the playoffs losing seven of the last eight regular season games.

Third year manager (and new Dad) Hans Heggernes knew the potential his squad had and kept his eyes on the end goal, a third TCMABL Championship.

The Coyotes came to play in the playoffs, with a .378 team batting average, scoring 31 runs on 45 hits (3 HR) and allowing only nine runs (8 earned) in three playoff wins. TCMABL 18+ Playoffs MVP Matt Grill went 2-0 with two complete game wins, while Adam Weber earned the complete game win in the American Division Championship to give the ‘Yotes another shot at the Cup. 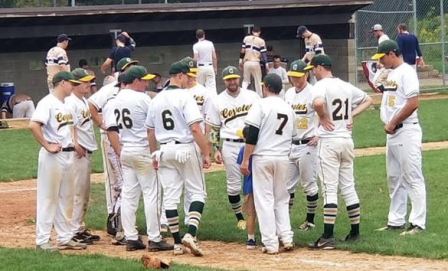 The Coyotes also added some fresh new talent in 2018 with rookies Kyle Hinseth, John Richter, Spencer Scott, and Stephan all playing a role throughout the year.

The ‘Yotes began their playoff run by defeating the Minneapolis North Stars 9-1 before beating reigning TCMABL Champions, the Eden Prairie Cardinals 11-7 to go on to the Sunday Funday Finale.

The Championship game would feature a rematch of the 2016 TCMABL Championship game. The St. Paul Rams (19-5) versus the Cottage Grove Coyotes (14-10) for all the hardware. The Coyotes were in control all game and never looked back as they scored 10 runs and banged out 18 hits. The whole roster contributed, as all nine starters

notched at least one hit. Pinch hitter rookie Hinseth added an RBI Sac Fly and veteran Nate Bochet added his own pinch hit single keeping his playoff hot streak alive. Grill was once again lights out for the ‘Yotes allowing only one run to the Rams in a complete game win.

The Coyotes deep and balanced team finished the season peaking at the right time, with their third consecutive TCMABL Championship game appearance, and hoisting their third TCMABL Cup. Congratulations to the 2018 Cottage Grove Coyotes on an exceptional year.