‘Flores Earns MVP on the Bump’

Our team consisted of six players let go from other teams in the 55+ division and two from the player pool just put together two weeks before the season started. The Cardinals went 13-2 for the season to win the spring championship. 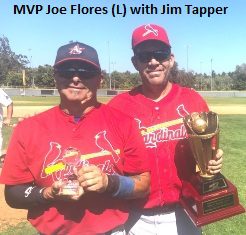 On the offensive side, Randy Collins went 4-4 with four RBI to help the cause. Randy also started on the hill for four innings and finished the ninth with a save. Don Sterns and Randy Martin each went 3-3, Terry Fury had two hits while Jim Tapper had two hits and two RBI. We were happy to have compiled a final score of 8-5 against a much improved Brooklyn Dodgers team.