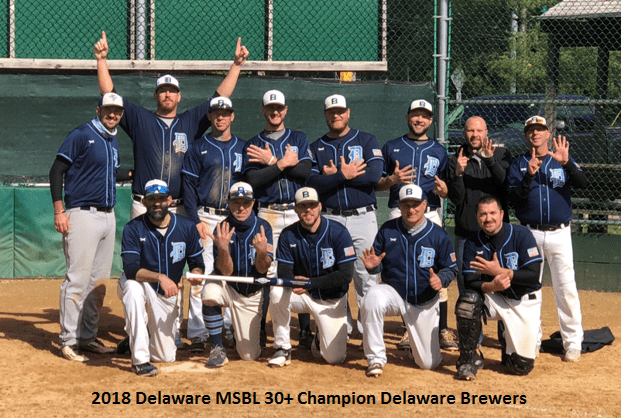 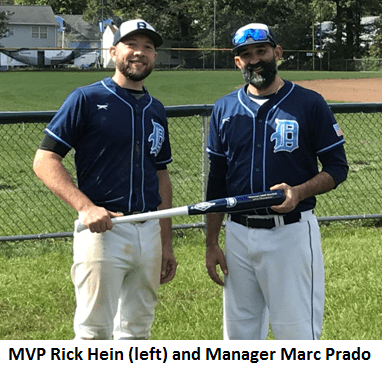 The Delaware Brewers captured their sixth straight Delaware Adult Baseball League championship in epic fashion. In the semi-final single elimination match-up the Brewers were down five runs with six outs remaining against the Walton’s Drillers and rallied for the win. Scott Rothwell’s walk off RBI double sealed the comeback and paved the way for the Brewer’s match-up in the finals against the upstart Diablos for the second consecutive year.

The Diablos won the first game of the best of three series behind the strong pitching and timely offense. In the second game the Brewers were down seven runs early in the game but veteran pitcher Rick Hein entered the game in the third inning and didn’t allow a run. With six outs left the Brewers again found themselves down five runs but rallied behind a “refuse to lose” mentality and total team effort to win and force a deciding game.

In a Herculean effort, Rick Hein again took the mound in the championship game and pitched five strong innings.

The Brewers were up 3-1 in the fifth and then turned to Clint Kuhl to finish things out from the hill, who extinguished any hope the Diablo’s had for a comeback. The game ended 3-1 and secured the Brewer’s sixth straight title and their 13th in the past 16 years!

The Brewers pitching staff recorded a 9-3 record combined with a 2.65 ERA and recorded an opponent’s batting average of only .196