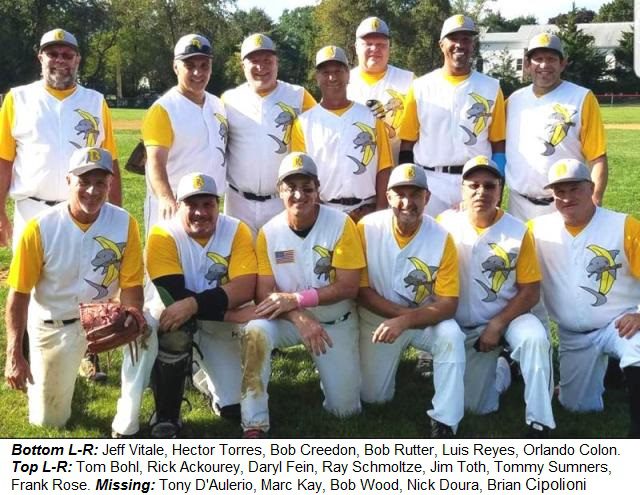 ‘Creedon Shines on Bump in Sweep of A’s’

Semi-Finals…After losing just one game during the regular season and bringing a 10 game winning streak into the playoffs, the Banana Sharks found themselves down 1-0 in the semi-final round against the Kennett Cutters, losing the opener 5-2. But the Banana Sharks, led by manager Daryl Fein, showed why they had a great regular season record by winning both games two and three by scores of 14-0 to advance to the championship round.

Championship Round Game One Versus Hatboro A’s…The Banana Sharks scored four runs in the third and nine in the fourth to cruise to a 13-6 victory over the A’s in game one. The Sharks took advantage of A’s errors and pounded out 12 hits. Tony D’Aulerio, Ray Schmoltze and Bob Rutter had two hits each. Bobby Creedon went the distance for the win.

Championship Round Game Two…The Banana Sharks held off an A’s rally in the last inning and brought home their third championship in the JADBL.

With the Sharks leading 8-4 after six, the A’s rallied to pull within one in the ninth inning and loaded the bases with one out. The A’s were a hit away from a tie or a win. In came Bobby Creedon for the Sharks, who had already won three playoff games. Bob relieved Jim Toth, who had replaced Frank Rose. Catcher Hector Torres caught a foul pop behind the plate, crashing into the fence for the second out. The A’s Dave Viviani then hit a line drive shot between third and short, but Jeff Vitale laid out to make a great catch and end the game. The Sharks sweep the A’s with an 8-7 victory.

Frank Rose went 6 1/3 innings for the win, while Bobby Creedon earned the save. The Banana Sharks had 14 hits, led by Creedon and Daryl Fein, who had three hits apiece.