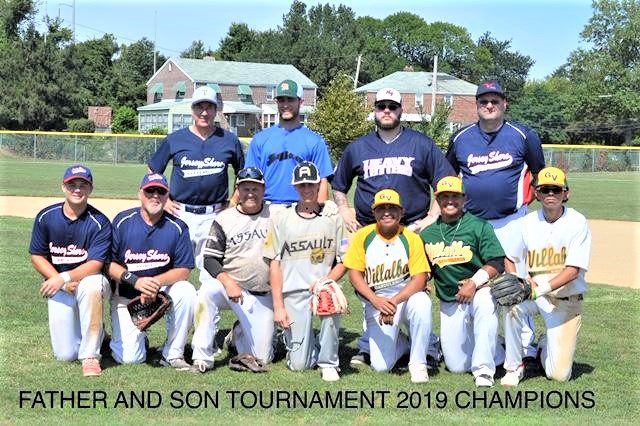 The annual JA DeBenedictis League Father/Son Tournament was recently held in Chester, PA and was won by our Team Balin, 4 games to 0. This is Team Balin’s second time in the tournament. We also won in 2018, winning four games and losing none. I was thrilled to play alongside my grandson, 14 year-old Kyle Leiser, who led the team in batting average. Here is a brief recap of the games: 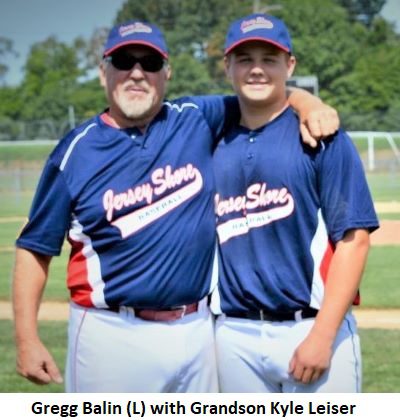 Game One versus Pisanti
Winning pitcher Tim Marker, Sr. started the game and threw five great innings. In the first inning Alexi Colon scorched a triple off the right field wall to score his father Willie, who reached on an error. In the fourth inning Tim Marker, Jr. singled and was moved to second on my ground out and then my grandson Kyle doubled down the left field line for an RBI. He would also score on an error.

In the sixth inning I led off with a base hit and moved to second on another base hit by Kyle but a throw to the cutoff man skipped away allowing me to move to third base. Mike Spatola then slapped an RBI single to plate me for the go ahead run. In the last inning Kyle doubled in Tim Marker, Jr., who singled, for an insurance run. Tim closed the game with a save in the last inning for a 6-4 win. Kyle Leiser was 3 – 4, (triple, double & single) with 2 RBI while Tim Marker, Sr. and Mike Spatola tallied two hits each.

After a quick scoreless first inning Team Balin sent nine hitters to the plate in the second, scoring four runs, with Mike Spatola plating a pair on a single as Andrew Spatola and Tim Marker, Sr., each singled in a run. In the third inning Kyle Leiser and I both walked with the bases loaded while Mike Spatola added another RBI single for three runs scored. The final score was 7-6.

The two unbeaten teams matched up in game three and it was a great battle. Team Galante held down the best hitter’s on Team Balin, scattering three runs over five innings. Kyle Leiser singled in the second inning, stole second base and scored on Andrew Spatola’s single. In the fourth inning Mike and Andrew Spatola, along with Tim Marker, Sr., singled and an error led to another run.

Team Galante was holding a 4 – 3 lead and exploded to plate four more runs and to seemingly have shut the door on the game with an 8-3 lead. In the final inning I led off with a single, then a

fly ball was caught for the first out seemingly to put Galante in control. However, Andrew Spatola and Tim Marker, Sr. followed with singles, loading the bases. Henry Colon, who had been hitless in two games, battled and fought off several pitches then doubled down the left field line for two RBI. Austin Spassatempo walked to load the bases while Lou Spassatempo’s RBI groundout plated a run. With Galante only needing an out to secure the win Willie Colon had an RBI single to plate his son, Henry. Alexi Colon then tripled in two runs, the go ahead run and the eventual game winner. Tim Marker, Jr. closed the game with a K and two ground outs to get the save.

In the first inning leadoff hitter Lou Spassatempo singled then stole second. After two outs were recorded Alexi Colon smashed an RBI double to right. I was pitching while Team Hefton battled back to plate a pair of runs in the bottom of the first. Team Balin scored six runs in the second on base hits by Mike Spatola, Tim Marker Sr., and an RBI single by Austin Spassatempo. Lou Spassatempo reached on an error, Tim Marker Jr. doubled in a pair of runs, and Alexi Colon singled in another run, putting Team Balin in control at 7-2.

The game quieted down in the second, third and fourth with each team plating two runs. Hefton scored a pair in the fifth, making the score 10-4. I was relieved on the mound by Willie Colon and then Kyle Leiser recorded the final outs to an ending score of 10-6. I picked up the win as Kyle Leiser, Alexi Colon, Mike Spatola and Tim Marker, Jr. all had two hits.

Great speed on the bases with timely hitting and great fielding, coupled with great pitching by the Father’s and games closed by Tim Marker, Jr., made us the winners. It was tough competition in every game.

Here are some stats from the tourney: