The South Jersey Men’s Senior Baseball League honored long time player Bill “Pops” Julio #7 on Sunday, August 18th. Bill has played in South Jersey Baseball leagues since the seventies and has played in the SJMSBL for almost two decades. He has been a mentor to many players though he retired from baseball at the age of 79 after last year’s 2018 season, where he won a championship with the 52 Division Cinnaminson Reds. Bill wore the #7 throughout his career, as do his two sons as a tribute to him. For those who know him and those who don’t he has been so fondly given the nickname “Pops”. On Sunday the league presented him with a plaque and his former team the Cinnaminson Reds presented him with his old jersey signed by his teammates. The SJMSBL has been very honored to have Bill in our fold over the years. He has had many achievements, and certainly the commitment and passion for the game we all love. On a personal note Bill has been one of my best friends and the hours upon hours we have talked about baseball and life in general has been nothing short of priceless for me.

On the field Bill was as fierce a competitor as the game has seen. Off the field Bill is a compassionate, caring giving human being. I have played on teams with him and hold those as very special times in my life. Bill has hung up the cleats but those who know him well are not totally convinced it is for good, myself included. Wherever life takes him, anybody who knows him or who has stepped on the field with him is a better person for having done so.

Congratulations Bill from all of your family at the SJMSBL!!!

Here are a few words from Bill after his ceremony:

(In Bill’s own words) Some of my most memorable days include:

I have cried only a few times in my life, all for deceased family and friends, until Sunday. I was humbled by the surprise ceremony on my behalf. Thanks to Lou, the players from my team, the 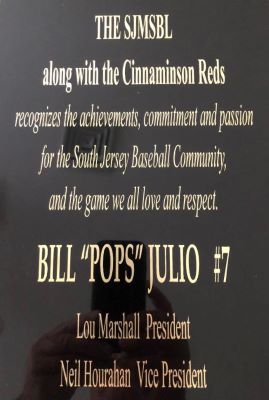 Reds and the visiting Phillies.

During my life I personally have been to similar ceremonies for players like Mantle, Feller, Stargell and Williams, all Hall of Famers, but that did not top Sunday.

Although we are not professional ball players, the players gathered at home plate for the ceremony have had longer careers and are dedicated and are truly the heart of what baseball is.

Thank you, Lou, whom I played for when I was young, and the real players: my family, my teammates, the gifts and the professional courtesy always given to my family.

Finally, one thought for all participants in this league and across the country; DON’T EVER TURN YOUR BACK ON “THE GAME” NO MATTER WHAT THE FINAL SCORE IS-AS LONG AS YOU ARE ABLE TO PLAY AND PLAY HARD “YOU NEVER LOSE.” ALWAYS BELIEVE IN YOUR FAITH.